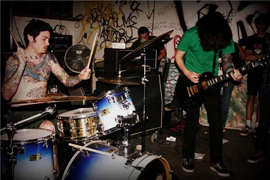 A389 Recordings has released a new installment to their popular sampler series for 2010. The monstrous 32 track album is available for free download by going to the link below and entering download code provided. Label head, Domenic Romeo (also of the bands Pulling Teeth, Slumlords and Virgin Witch) says “I’m thrilled about every record A389 has coming out this year, both from a label perspective and as a fan of the bands. 2010 will see new music from Integrity, Pulling Teeth, Gehenna, Pala, Seraphim, Gray Ghost, Caulfield, Blind To Faith, Deathammer and more. The comp also has a slew of material from our back catalog and a few handpicked songs by bands we love that are treading their own path outside of A389 such as Triac, Vegas and Gnarly Rueage. The initial people who have listened to the sampler have commented on how it all flows seamlessly and doesn’t drag. I think that’s pretty cool for a compilation with 32 bands/32 songs stacked up like that.”

A rabid vinyl collector himself Dom mentioned “I’m really excited that the Mlllenial Reign recordings are going to finally see the light of day. They were an awesome Integrity/Ringworm inspired band from Toronto featuring Damian from Fucked Up on vocals and Jordan from No Warning/Terror on guitar. It was supposed to come out years ago on another label but fell through the cracks. Luckily we were able to pick up the pieces for that. It’s a ripper.” The sampler is closed out by an exclusive live track of metal legend/B movie star THOR with Pulling Teeth as his backing band from the “Show That Ends The World/A389 Anniversary bash” this past January.

As a bonus for fans, A389 will be offering a free download of the album/EP of their choice if they submit a track by track review of the sampler. Details at www.a389records.com.