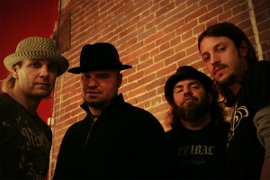 The Skinny: 7dayBinge released their debut, self-titled album via digital download portals on December 8, 2009, with a hard copy release following on January 26, 2010. The group includes Todd Harrell of 3 Doors Down on bass, Jon Nicholson of the Muzik Mafia on guitar and vocals, Kenny Olson of Kid Rock’s band on lead guitar, and Shannon Boone on drums. “7dayBinge” was be released by Rock Ridge Music and the band plans to tour in support of the album; tour dates will be announced as they are confirmed.  [ END ]

Prizing:
TWO (2) extremely lucky 7dayBinge fans will each win a FREE copy of their self-titled debut album as well as a poster autographed by the entire band. Don’t miss this one!