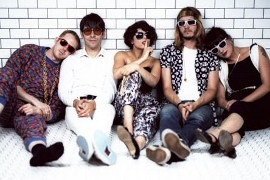 Canadian outfit You Say Party! We Say Die! have indeed been off to a busy 2010 already. Kicking off the new year by resuming the #1 and #2 campus radio spots in Canada, as well as featured airplay on KEXP, the band are set to kick off their North America tour playing the official 2010 Cultural Olympiad this Friday, January 22 with Phoenix in their hometown of Vancouver, Canada for a massive sold-out performance.

To celebrate their upcoming release and tour, You Say Party! We Say Die! are set to release a digital single for “Laura Palmer’s Prom” on February 16th with two exciting remixes.

You Say Party! We Say Die! began their days opening up for local bands in a church basement of their hometown of Abbotsford, just a short drive away from Vancouver, Canada. It was there that they steadily gathered a growing legion of loyal fans extending far beyond the basement, yielding a successful national tour and independently releasing their debut EP, ‘danskwad’ (pronounced: “dance-squad”) in 2005 – soon after they signed to Sound Document who sent them back to the studio to work on their debut album.

Two full lengths later, with plenty of lengthy and enjoyable yet equally exhausting tours behind them, the band decided to take some time off from the road in 2008 to record their newest album, ‘XXXX’. Set for release February 9, 2010 with Paper Bag Records, this dark dance-pop five piece will embark on a full national tour across the U.S. to promote this exciting release. Watch exclusive video for “Dark Days” filmed in their rehearsal studio below.