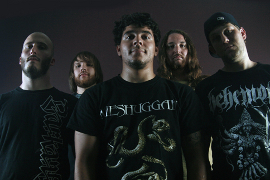 The track, “The Manifest,” from Through The Eyes Of The Dead’s upcoming record, ‘Skepsis,’ (February 2, 2010 via Prosthetic Records) will make its broadcast premiere this weekend (January 22-24) on Full Metal Jackie’s nationally syndicated radio show. Visit Jackie’s site, HERE to see where you can hear the track in your area.

Since signing with Prosthetic in 2005, TTEOTD has SoundScanned nearly 60,000 copies and toured with a who’s who of heavy music, perhaps most notably as part of the now-legendary 2006 Sounds of the Underground tour that featured a stacked lineup of metal gods In Flames, Trivium, Behemoth, Cannibal Corpse, GWAR, The Black Dahlia Murder, As I Lay Dying and more. The band kick off a US tour with Otep, Bury Your Dead and Destrophy on February 15th.