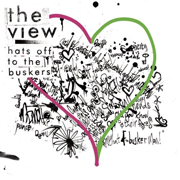 The View – “Hats off to the Buskers”

Dundee’s favourite band, The View, “took off” in media terms from early 2006, which eventually resulted in a number 1 album, Hats off to the Buskers in January 2007. Although a quite slick recording, the album has a fair amount of raw energy within it, most probably because of the tender age of these 4 young men. Some members of the band had only just reached their 20th birthday at the time of release.

Despite their lack of experience, singles “Wasted Little DJ’s” and the highly addictive “Superstar Tradesman” reached number 15 in the UK singles charts. “Same Jeans” became almost like an anthem over here in the UK and accordingly reached number 3 in the UK charts. Clearly, The View have the goods to produce catchy pop-rock-indie tunes that appeal to the masses. However, that is not to say that those outside the mainstream cannot enjoy this album.

Most of the songs on the album are short and sweet, likely to be around 3 minutes long. Unfortunately these similar sounding songs can result in your boredom and may lead you to seek another band with a bit more diversity. However, they are all individually great songs and could all be singles, worthy of mainstream radio. The majority are uplifting and bouncy, the total opposite of bands such as Radiohead.

Overall, the album isn’t a complicated or mind boggling listen, but simple and effective. I doubt it would blow anyone away with amazement. However, it certainly shows there is a talent within this band and they clearly have the potential to be bigger than they currently are. They’ve yet to really hit success in the USA and maybe that’ll hold back their success but there’s plenty of time for them to mature and become even better songwriters. Their second album Which Bitch? wasn’t quite as successful, but a third album is on the way and it’ll be intriguing to see if they can kick start a bit of interest again.

Hats off to the Buskers is a great little album. It’s fun, chirpy and uplifting with some occasionally great lyrics. I don’t like to compare but they are in some ways similar to Arctic Monkeys and The Fratellis. For those lovers of hard rock, metal and punk, you should probably stay well away! Although some of the songs (especially when played live) have a bit of a punky feel, I doubt the punk crowd have taken much of an interest in The View. To sum up, Hats off to the Buskers is a pretty good effort and continues to place Scotland on the music map along with The Fratellis and Biffy Clyro.  [ END ]