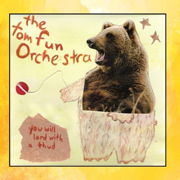 The Tom Fun Orchestra – “You Will Land With A Thud”

First of all, The Tom Fun Orchestra (TTFO) aren’t a real orchestra, but they probably have one of the closest sounds to an orchestra that I’ve ever heard from an indie band, just because of the sheer different noises the band create. I’d tell you how many members are in the band, but whatever number I stated, I would probably be wrong. Some websites state there are eight members, yet their MySpace has nine faces at the top of the page. Who knows?

More important, is the quality of TTFO’s music, which is of a fantastic standard. It can be mellow and also fast, but thankfully it doesn’t switch between the two too often or too rapidly. To describe what’s in the music is actually quite hard as there are all different types of sounds from various instruments which I’d guess to be including guitars, bass, violin, accordion, banjo, clarinet, drums, trumpet and probably more.

I described the genre of music as ‘indie’, but in all truthfulness TTFO also bring their influences from blues, folk, rock and in places, punk. On first listen, it’s maybe a little tricky to get your head around, especially if you aren’t familiar with the instruments or genres that are being played. However, the energetic and fun vibe you experience while listening to the CD starts to win you over and the structure and pure genius of the songs start to reveal themselves. Basically, at first it might be too much to take in all at once, but with each listen the record gets better and better.

Although the typical indie fan may experience what’s described above, those of you that regularly attend small blues and jazz bars around the world, will instantly warm to these guys. TTFO are that ‘once in a long time’ band that you reminisce about in years to come and compare with to the new bands that ‘just aren’t as good’. TTFO turn the small and unremarkable bars around the world into boozy, hot and sweaty rooms where the crowd forget about all their problems and just let loose and enjoy themselves in the craziness. They are just, instantly unforgettable.

TTFO indeed are well renowned for being quite sensational live and if you like the record, which I highly recommend, chances are you’d love them live.  [ END ]