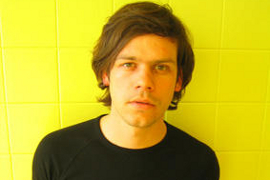 Check out the brand new video from indie rockers The Go Find for the song, “It’s Automatic,” off their third album, ‘Everybody Knows It’s Gonna Happen, Only Not Tonight’, coming out on Morr Music on February 16th. You may recognize the colorful mountainous setting as the one from their album cover – it seems they prefer hanging out in this 2-dimensional world with fake birds, clouds and confetti.

Stereogum premiered the video for “It’s Automatic,” calling “Belgian electro-pop whisperer Dieter Sermeus and his Go Find’s [music]…appealingly familiar.” Check it out the “It’s Automatic” Video, Directed by Kurt Max and The Go Find below.