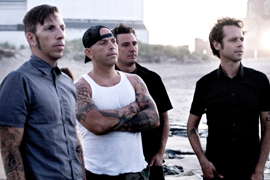 The Bouncing Souls – “I Think That The World…”

the Skinny: LimeWire Store has released Live at Lime with Bouncing Souls. Currently celebrating their 20th anniversary, the iconic punk outfit recorded five exclusive tracks before they left for an extensive European tour. The fast and furious five-song EP features rip-roaring Souls numbers “Gasoline” and “True Believers” (featuring Sick of It All’s Lou Koller), as well as “The Mental Bits” (featuring Fishbone’s Angelo Moore), “I Think That the World…,” and “Sing Along Forever.” Like a fine wine, the Souls’ brand of punk only gets better with age. “Anyone who’s seen a Bouncing Souls show knows they are a great live band, so they were a perfect fit for our Live at Lime series,” said Tom Monday, Director of Partner Relations. “Not only was the band a lot of fun to have in the studio, they sounded great and enlisted some awesome musician friends like Sick of It All’s Lou Koller and Fishbone’s Angelo Moore to join in. I think this is one of the best sessions we’ve done, hands-down.”  [ END ]