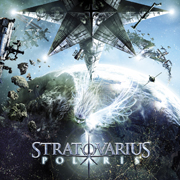 In 2008, long time guitarist Timo Tolkki left Stratovarius and signed over the Stratovarius name, royalties and catalog to Timo Kotipelto, Jens Johansson, and Jörg Michael. A year later the band reassembled with a new guitarist and a new album to put at the top of their catalog. The album was called Polaris and it represents a new beginning for this metal band.

Before listening to this record, take notice of the visual displays throughout the album. These were done by none other than Gyula Havancsak (www.hjules.com). Other great metal acts he has designed for are Annihilator, Iron Maiden, Tyr and more. Gyula kept with a space theme and added a photo of each band member throughout the booklet. The photos were taken by Ville Juurikkala (www.villejuurikkala.com). Ville, an accomplished photographer, has done photos for Amorphis, Apocalyptica, Lordi and other bands. Just looking at the album and its magnificent art got me pumped to dive into the music.

Stratovarius have kept with their traditional power metal sound that they have been known for since 1984. The main difference between this album and previous works are the new members. Matias Kupiainen took over guitar duties and has matched the same style of sound to the bass riffs but adds his own little twist. The other new addition is Lauri Porra (Warmen, Sinergy, Almah, TunnelVision) who took over on the bass. He backs up the guitar and ties it in with the rest of the members.

To keep the melodies of the new stringed section together, Jens Johansson overlays some melodic keyboards and sings backup to the ever so powerful vocalist, Timo Kotipelto. Timo once again throws in some tremendous singing over the melodies of the rest of the band bringing strength to the songs. Last but not least, to keep the tempo is none other than legendary drummer Jörg Michael who has performed drums for a variety of bands. Once again he keeps the beat and tightens up every song with his drum skills.

Even though they may have switched up their strings section, Stratovarious have once again created a memorable album for metal fans to enjoy. Polaris is, as I said earlier, the new beginning for this band. Fans of Warmen, Sonata Arctica, Blind Guardian and Symphony-X will love this release. Unlike the name of the third track, “King of Nothing”, they are the King of Power Metal.  [ END ]