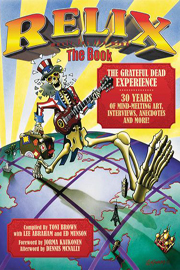 “Relix The Book: The Grateful Dead Experience – 30 Years Of Mind-Melting Art, Interviews, Anecdotes And More!” What a long title! As a fan of The Grateful Dead for many years now, I found this book to be an incredible read. The book was compiled by Toni Brown, the founder of Relix Magazine and consists of a plethora of articles and interviews taken from the pages of the influential jam based music magazine.

The reader is presented with a chronological history of this incredibly important band through a variety of sources. In addition to the articles taken from Relix Magazine there are letters and musings from fans and other legendary musicians such as Jorma Kaukonen and Derek Trucks. The sum of all of these varied sources allows the reader to gain access into a subculture based around one of the most important bands in the history of music.

While I never followed the band from city to city, as so very many did, I did attend a fair amount of shows in my formative years. This book brought back so many fond memories, I even found myself being a bit nostalgic at times. The pictures and illustrations in this book are worth the price of admission alone. They are nothing less than stellar and the oversized design of the really helps to enhance the already fantastic art.

I feel this book works on many different levels. For the legions of “Dead” fans out there, this book will become a necessity. The band has been gone for a number of years now but the memories live on in these pages. For those not familiar with the counter culture world spawned by “The Dead” this book serves up an unbelievably detailed history of the band and it’s followers and could be used a starting point in familiarizing oneself with the scene. Lastly, I feel this book will appeal to those who appreciate high quality pictures, paintings and artwork.

The book also briefly touches on the post Grateful Dead scene and highlights many of the current artists, such as Phish and The Dark Star Orchestra, who were directly influenced by the band. At the end of the day I found myself thoroughly engaged in this book. I recommend “Relix The Book: The Grateful Dead Experience” to anyone who is a fan of music; it is a terrific in-depth look behind the scenes of quite possibly one of the greatest bands of all time.  [ END ]