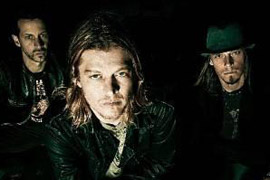 One of the most successful post-grunge bands is Kansas City, Missouri’s own Puddle of Mudd. The band made it huge right away with their debut Come Clean in 2000 which has sold an astounding five million copies and made Puddle of Mudd a household name. Despite some line-up changes over the years, the band is still together and producing new music including their latest release Vol. 4: Songs in the Key of Love and Hate, just released at the beginning of December. So far P of M has a few tour dates scheduled for January but expect to hear about a more extensive 2010 North American tour in the near future. Shortly before the release of the new record we had the opportunity to speak to both Puddle of Mudd founder, vocalist and guitarist Wes Scantlin and guitarist Paul Philips about what the band is currently up to as well as some background on the making of Vol. 4.

The brand new album Vol. 4: Songs in the Key of Love and Hate is due out in December. What are your feelings on the record now that it’s just about to come out?
Wes: We’re excited man, we’re very excited, we’re actually really super fortunate to have a lot of professional people with the record label, management and everybody that’s involved with the record, we have a great team of people. We’re just going to put it out there and hope that everyone connects with it and likes it man.

Now Vol. 4 comes only two years after the release of the last Puddle of Mudd record Famous. Did you have any downtime after touring behind Famous or was it right back in the studio for you guys?
Paul: We didn’t really have any downtime, we would come home on breaks and go into the studio and then go back out. We haven’t really stopped touring, we haven’t necessarily been on a full blown tour but we haven’t stopped going out and doing one offs and stuff. There was really no downtime at all.

How do you think Vol. 4 compares to Famous or the other Puddle of Mudd records? What would you say is maybe different about it in terms of sound and style?
Wes: Instead of like you know ten or fifteen cooks in the kitchen, there was just like four or five people writing and recording as opposed to over-thinking shit. We got Paul Phillips back in the band and he brought some super aggressive guitar playing and uh, you know we tried to make everything as raw and as edgy and as hard and heavy as we could possibly get it.

Paul: A lot of sore throats…

Now you chose to work once again with Brian Howes on the new album. Why did you go with Brian again?
Wes: Well you know they run a pretty kick-ass operation up there in Vancouver and he’s a smart guy, good songwriter and you know, it worked last time so you know fuck it, let’s roll. We got to work with John Kurzweg again who did the Come Clean record and half of Life on Display and we got him back in to do a few songs. Then we got another dude named Brian Virtue… So there were three producers on the record and they’re all cool man, it was actually kind of cool to do it like that because you get a different vibe with each one so it was kind of cool, it keeps it interesting.

What would you say is Brian’s greatest asset in the studio? What does he bring to the table that made him the right producer for this record?
Paul: He’s a musician that was in bands anyways and uh, he’s been rocking for a long time and he’s been writing for a long time, he keeps everything pretty simple. He comes up with really cool little ideas too, things that you kind of don’t think about so he’s kind of outside the box looking in and he’ll throw something at you and you’ll be like “oh wow man, that’s a great idea…”

You mentioned there a moment ago that you also worked a little bit with John Kurzweg who you of course recorded Come Clean with. What was John’s role in the making of this new record? Did he just do a couple of songs?
Wes: Well I had to call him myself, I called him up and I kind of begged him, he just went through some like serious tragic kind of thing with this chick and he was kind of sad and I was calling and was like “hey man, fuck this dude, come up here man, come up to LA and just hang out, we’ll do a couple of songs and get your mind off of things.” He said no to everybody else but when I called him he was like “oh well you know, that sounds cool, alright…”

I guess you have that special charm Wes…
Wes: I tried to get a couple of chicks to come in to like the studio and give a little beej… nobody went down though. I got my bus driver laid in Las Vegas about a week and a half ago, that was awesome. He hadn’t been laid in like five years, I went into his room and I was like “yo dude, we got to talk bro, you’ve been driving the bus like shit, it’s pissing me the fuck off man.” Then I said “hold on, I’ll be right back.” He was like “ok, I’ll sit here.” Then we sent in the goods. I went and fucking lost all my money in the casino and he came down with a big smile on his face.

Yeah I’m sure it was a very wide smile. How would you say the average Puddle of Mudd song is written? Is it a collective effort or is it more the work of Wes on his own?
Wes: Uh, a lot of the time I’m sitting there late at night, this time fortunately I had Paul at the house staying up there so he like took a lot of weight off my shoulders. Doug comes up with some cool riffs every now and then, but I do a lot of it man, I’m not going to lie, I’m not like a egotistical freak but that’s all I did, sat at the house, drink beer and write songs man, there ain’t nothing better to do.

How many songs in total did you write for Vol. 4? Was it difficult trying to decide which ones to include on the final track listing?
Wes: I think we actually did have more.

Paul: We did a handful more than what made it on the record, not very many.

Wes: We’ve got like four B-sides. There were some tracks that we didn’t use on Famous that were really cool and those are going on different, like, special edition things or something? Deluxe edition… with four B-sides, there are some really cool songs.

Paul: We did some acoustic versions of the songs after we finished them.

Speaking of the track listing, the record contains ten songs in total, a couple short of an average rock and roll record. Was the intention to cut down on “filler” songs?
Wes: Like you know Led Zeppelin would release a record that had like eight songs on it man.

Yeah but that’s back in the day, nowadays you usually see an album with eleven or twelve tracks you know…
Paul: We really just kind of wanted to you know get in the studio, get it done and get back out on tour you know… So we wrote a bunch of good kick ass songs that we’re really happy with and hopefully you know nobody’s pissed off about just the fact that there’s just ten but you know there are extra B-sides and acoustic jams too. It was quick, simple and it was definitely, it felt great you know, picking through fifty jams, we just came up with ten, twelve really cool songs and we just cut it down to ten.

You have a few tour dates lined up for December around the U.S. What are your touring plans like for early 2010?
Paul: Shinedown, Puddle of Mudd and Skillet, January for about a month. And then after that, I’m sure in the meantime everybody will be setting up our own headlining tour, we’ll maybe go out with another kick ass rock band or two or three or whatever and then eventually we’ll just be basically on our own doing our own headlining stuff again with cool support bands.

So we can expect to see you guys on the road for the next year or two I guess?
Paul: Yeah we’ll be on the road for about a year or two, year and a half and we’ll probably go back over to Kuwait and Iraq, play for the soldiers again and do that whole mumbo jumbo awesome stuff. Then Canada, we’re going to the international office in a second and get on that dude right now.  [ END ]