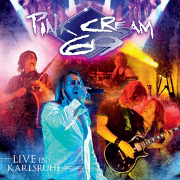 Live In Karlsrushe is quite an impressive CD/DVD package. I will be honest I had never heard of Pink Cream 69 before I received this release in the mail. Needless to say I had no idea what to expect when I popped this into the player… I was caught off guard. What I found when I hit play was quite notable and frankly, unanticipated. These guys play a brand of contagious rock that gained my attention straight away.

Pink Cream 69 is a group of exceptionally talented musicians who play what I would describe as melodic, progressive, power metal. The songs are big and catchy with tons of harmonies but they still contain intricate detail that makes them incredibly enjoyable to listen to, or in this case watch. Actually I think being able to see the band performing these songs adds a whole new dimension to the experience. I think some live DVD’s tend to become a bit boring and by the time I get through the first song or two I am ready to hit the pause button. Not the case here, Live In Karlsruhe kept my attention throughout and I found it fresh and alive.

Also included on this DVD are in-depth interview pieces with the individual members of the band, which for me were very enlightening and served as a good introduction to Pink Cream 69. As I mentioned earlier I am not familiar with the band but apparently this performance was recorded at their twentieth anniversary show. I am not sure how a band of this caliber has slid under my radar for so long but I am glad I have finally found them. Disc two contains videos form the early years of the band from 1992 to 1998 including a performance from the 2007 Masters Of Rock show.

Music fans of all genres will appreciate the sheer musical talent of these guys. I was more than impressed. From a quality standpoint, Live In Karlsruhe is professionally shot and is top notch. Bottom line, Pink Cream 69 may not be a household name here in North America but Europeans seem to be hip to them. Live In Karlsruhe is absolutely worth checking out.  [ END ]