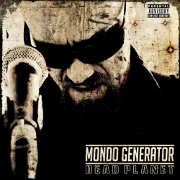 As the first full-length project by Nick Oliveri with his long-running band after his dismissal from his duties as bassist for Queens Of The Stone Age, you might be revved up to take a tabloid-style comb to Dead Planet, looking for clues as to his anger or upset at being dropped from what was at the time the most popular hard rock band going. Sorry to say, you’re not going to find much to work with here.

What you will get instead is vintage Oliveri, as he combines his mutual loves for ’70s boogie rock, thrashing punk, shitkicking country, and outsider garage rockers like Roky Erickson (whose “Bloody Hammer” gets lovingly covered here) while spitting and screaming and moaning away at the ills of the world and the women who have done him wrong.

The album really feels like a cleansing gesture of sorts. Four of the tracks on it were previously released as III The EP, one, “So High, So Low”, is a re-recording of a song from an older MG disc, and two more are reconfigured tracks from Oliveri’s old band The River City Rapists and from one of his acoustic albums (the driving, surf music-inspired “Paper Thin”).

You get the impression there was a statement he was trying to make with this album to his former bandmates, it’s a quick flip off to them as he drives away. A not-so-subtle reminder that he has written great songs in the past without Homme and co. and he will continue to do so without them. It’s a convincing statement at that.  [ END ]