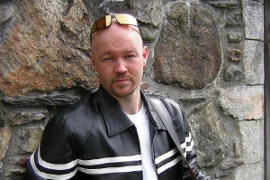 Interview with On The Rise frontman Terje Eide

Mixing skilled musicianship with a dazzling production and first-rate songwriting the Norwegian melodic, rock band, On The Rise has fashioned a sequence of well-crafted tunes that metal fans will enjoy immensely. Every track is radio friendly and should garner the band tons of airplay around the globe. I was able to chat with vocalist and guitarist Terje Eide about the band’s new effort, Dream Zone, which was released through Frontiers Records.

Now that your brand new CD, Dream Zone, is complete how do you feel about it? Are you satisfied with the outcome?
Terje: I’m quite satisfied for sure. It’s been a privilege to be able to follow the new On The Rise album Dream Zone step by step; writing it and producing it. It turned out the way I wanted it to be.

How quick are you in the studio? Can you usually knock things out in a couple takes?
Terje: It is no problem to being quick at all, but it all depends on what’s needed for a song. Financially it might be a good thing to be quick, but musically it’s the best to use what’s necessary to catch the groove and those amazing and inspirational moments that pop up while writing and recording songs.

Do you decide on a suitable sound fairly quickly, or do you tend to tweak tones obsessively?
Terje: I’ve got a picture of how I wish and want it to be. Especially during the process of the production. I’m always particular with the arrangements. The main foundation is done up front before I end up in the main studio. Amplifiers are added to make it sound more solid and powerful.

How did you develop your solos?
Terje: Every solo has been developed through joyful jamming and rehearsal. Step by step they’ve been formed into the arrangements until they were all set and clothing the songs.

What song from that album is still exciting for you to sing?
Terje: It’s always difficult to pick any favorites, ‘cause every one of the new songs are still inspirational to do. The melody lines are well suited for the style and the way I love to sing.

When you begin to put an album together are you concerned at all about commercial success?
Terje: To be honest I never think about that part. It’s the same as I did regarding the debut album. I’m pretty much focused on the music. I’m in it for the true passion of music. Everything else that comes along is a bonus!

What’s your musical background?
Terje: I captured the public ear at age 16, as singer, guitarist and songwriter. My musical career began in earnest a year later, through winning a local talent contest. Later I enjoyed a stint with the band Heaven & Hell, a rock institution in Bergen in the 80s. In 1986 I won the Norwegian National Rock Championship on national TV with the band The Heat. I started my own band a few years later. I have spent several years exploring various musical genres, as well as playing with local artists as a guitarist, singer and backup singer. This capacity landed me a variety of large-scale shows and concerts, backing acclaimed Norwegian artists. I went back to my roots of melodic rock in 2000 by starting a project that later on became On The Rise. A demo was made in early 2001 which immediately raised the interest of Frontiers Records s.r.l, who signed the project in June 2002.

Dream Zone comes to us by way of Frontiers Records. Are you happy the way they handled the record, regarding distribution, marketing and promotion? How has the label been accommodating the band’s needs?
Terje: It’s a pleasure to work with Frontiers Records. They’re all great guys with enthusiasm and passion for the music we all love so much. I’m quite happy about the way they have handled the new album.

What is the toughest lesson you ever learned in the studio and on the stage?
Terje: It’s difficult to say. At this point I can’t see any specific lesson or even moment on stage that’s been tough in any way.

Are there any European gigs already lined up in support of Dream Zone? How much roadwork do you expect to be doing in 2010?
Terje: One The Rise has been a studio project for a long time, but we’ve talked about bringing it out on stage. Especially when I look at the amazing and wonderful respond on the new album – Dream Zone. Time will show if we’ll be able to do some roadwork this year.

What is next for On The Rise?
Terje: To promote and support the distribution and the marketing of Dream Zone the best way possible!  [ END ]