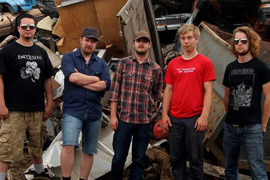 Norris have been ripping their way through Canada leaving behind a trail of fans who are happy to be beaten to a bloody pulp by this band’s extreme blend of metal and hardcore. It’s been just over a year since the release of their last EP, Bone Crusher, and now the boys are hard at work on their first full-length album which is sure to be a great addition to the music collection of anyone who loves their music gruellingly fast and hard. Here, guitarist Sean Skillen and drummer Josh Hogan, tell us about how the record’s coming along, why fans love a Norris show, and share some of the thing’s they’ve learned over the years.

I see you’re working on a full-length. What stage is that at right now?
Sean: We are just finishing up the fourth new song for the album. We plan on finishing writing and recording over the winter to have fresh treats for your ear-holes in 2010.

How’s the whole process been going?
Josh: We are working a lot faster than we have in the past. Things are coming together at a quick pace which is new for us. Previously we took a long time, but we are all living in the same city now and everyone is really focused on creating an amazing album. We are trying a lot of things we never had the chance to before and we are pushing our sound into some new areas. This shit is intense!

Sean: This is the first time I have been a part of the band’s writing process and I think we’ve found our groove. I think the sounds have matured quite a bit since the last EP.

Is there anything that you learned from making your EPs that you’re going to keep in mind with the upcoming album?
Sean: We are learning not to rush it. Bone Crusher was recorded and released inside of two weeks. I went back and remixed it for the physical release, but the whole process was rushed. This time around we’re giving ourselves enough time to get it just the way we want it.

Josh: Definitely. I think with this being our first full length, we are expecting a lot out of it, and making sure it is 100% right is at the top of everyone list. Every time you create something you are able to look back and see what you would like to have done a little different, that’s inevitable. But with the experience we have had over the years I think this next release will really represent what we are about a lot more accurately.

One thing that everyone says about Norris: you always kill it live. What are you guys thinking when you’re up on stage?
Sean: Not much, to be honest. I am always concentrating on my playing too much to notice anything else. Playing live is always a little hectic and you want to make sure to move around enough to keep it interesting to the crowd but that in itself is a lot to concentrate on. I’m usually thinking about not fucking up the riffs although sometimes it’s unavoidable.

Josh: It’s kind of like walking a tightrope: you try to concentrate on the arrangements and making sure you are playing everything correctly, but at the same time you need to put a lot of power and feeling behind it so that it connects with the audience. You don’t want to think about it too hard and psyche yourself out. It’s always the best when the energy you give out to the crowd comes back to you, and sometimes you lose yourself in the music if you aren’t careful. So, just as Sean said, a lot of it is spent thinking ‘don’t fuck up!’

Can you tell me about your best or craziest show to date?
Josh: One recent one that comes to mind is the Halloween show that we played in our hometown of Thunder Bay. The bar was completely packed with everyone in hilarious costumes who were beating on each other and moshing. It was hilarious. There was plenty of violence and people were hitting the floor and cutting themselves on broken beer bottles and shit like that. Another one would be our show in Toronto just a few weeks ago. We played on a half-pipe at an awesome loft-type venue called Soy-Bomb, and we had a backline of gigantic amps. It was packed and it was LOUD. It had a great vibe.

You’ve played with a bunch of amazing bands, some of which, I’m sure, are big influences on you guys. Is there one band from that list that stands out and why?
Sean: Danza stands out the most for me. We opened for them in London last summer and it was really great to watch those guys bring the house down. They are heavy and tight as hell live. Really professional. It was one of the few bands I actually enjoyed watching this year.

Josh: We played with Converge a few years ago and that was amazing. Converge is such a solid band, their last 4 albums are just mind blowing. They have had such a solid career as a band that pushes the envelope and always brings a new level of intensity in everything they do. It’s very inspiring, especially in heavy music, to see such an awesome track record. They are a huge inspiration.

Have you gotten any good advice from any of them?
Sean: The guitar player recommended Schecter 7-strings to me and I eventually bought one. I loved the feel of it compared to the others on the market. I’d say it was good advice!

Josh: Nate from Converge told our bass player at the time to not look up to them because they are the ‘worst dudes ever’…. I don’t think he was joking either. [laughs]

Is there anything that you know now that you wish someone would have told you when the band was just starting out?
Josh: Over the years we have learned so much from being in this band and experiencing things, I don’t think it would have made sense to have had someone telling us how things are going to be. We do our best to educate ourselves about everything from recording ourselves to booking our own tours to being a solid live band. Norris is a very DIY band and the lessons we’ve learned from what we’ve been through aren’t something we could have been taught in any other way than first-hand experience.

What are your plans for the new year?
Sean: Write and record. Repeat. Ad nauseam.

Josh: Put out a face-melting full length album that we are all proud of and make sure that everyone hears it. Then hit the road and watch kids beat on each other every night to our tunes.

Is there anything else you want to add?
Josh: Keep checking up on our MySpace page. We should have a new demo up soon as well as the videos from our “Fall Fail Tour” which are on our YouTube channel.

Sean: Wrap it up kids. We don’t need any more humans on this planet!  [ END ]