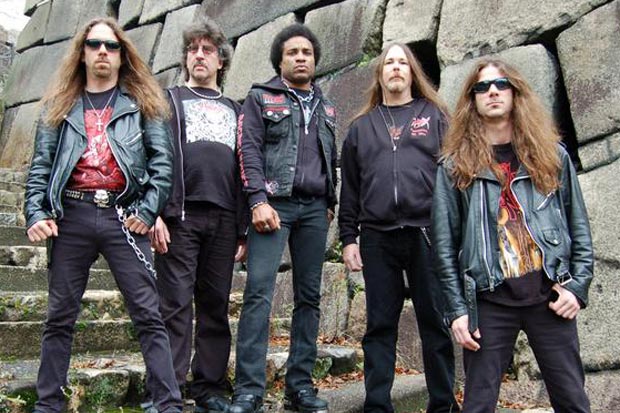 El Rostro De La Muerte is the newest release from the thrash metal band Hirax. Let me be the first to tell you, this is a serious head banging thrasher designed to get your neck snapping and keep it in motion for the duration of the disc. It begins with the intense and ferocious “Baptized By Fire” and does not let up until the finale “Satan’s Fall”. In between are some super solid, hard and heavy tunes that are rife with in your face riffing and screaming guitar leads. El Rostro de la Muerte, (The Face of Death) is sure to be a welcome addition to any neck wrencher’s catalog. I caught up with vocalist Katon W. De Pena and spoke to him about the bands newest release and their touring plans for 2010.

The name of the band HIRAX is interesting to say the least and sounds as if there is a story behind it. Where did the name come from and what is the story?
Katon: I got the name off of a bathroom wall. It was an advertisement on some wallpaper. It described two things… 1) A small furry animal from Africa (it is a descendant of the elephant, but looks more like a small rabbit meets a guinea pig). The other definition 2) A bug repellent for mosquitoes. I myself thought that it would be a great name for a metal band, so I named my band HIRAX. Now the world knows this name to be a legendary thrash metal band… one of the originators from the early 1980s. I am very proud of this!

Now that your brand new CD, El Rostro de la Muerte is complete how do you feel about it? Are you satisfied with the outcome?
Katon: I am extremely excited about our newest CD, El Rostro de la Muerte (“The Face of Death”). We have taken our music to a completely new level. Glenn Rogers – lead guitars, Lance Harrison – lead guitars, Steve Harrison – bass, Jorge Iacobellis – drums. Now this CD is available for the whole world to hear through: Seasons of Mist Records/Distribution. I am very satisfied with the complete package! The lyrics are included, the artwork is totally killer! The production is heavy and very loud, excellent sound quality. Recorded and engineered by John Haddad, mixed by Andy Haller (Ozzy Osbourne, System of a Down, etc.) and mastered by Maor Appelbaum (Yngwie Malmsteen, Rob Halford, Dave Ellison – Megadeth, etc.) When the fans listen to these recordings, I know they will be blown away. This is our best studio work to date.

Give us some insight into the record El Rostro de la Muerte and the meaning behind its title?
Katon: The title “El Rostro de la Muerte” (The Face of Death) was an idea of mine that I had from touring through the great country of Mexico. There is a religious saint whose name is Santa Muerte. Banned by the Catholic Church. I was intrigued to find out more about this religion/cult. This is what the title of the album is based upon. Once you read the lyrics you will understand the whole concept. Whether you agree with this religious icon or not you will learn something you never knew about and will have a whole new understanding of this spiritual being. I think that people always have to keep in mind that you can’t judge the book by the cover.

Give us some insight into the album lyrically. This is a super pissed off sounding record.
Katon: I think that this record will evoke all kinds of different feelings from each person that listens to it. Yes, there is a very aggressive feel to the entire album. However, I would say that most of the songs have a very positive message, as I always try to do lyrically. Obviously, there are some dark subjects revolving around wars, Jihad and the every continuing struggle and battle for people to coexist. Poverty and greed, and many other concepts are intertwined into the fourteen songs on this brutal, thrash metal CD. If you really read the lyrics, you will feel the urgency for mankind to wake up and embrace each other! Humanity is slowly killing itself off and it is time that we put a stop to it!

Your lyrics are infused with heavy detail and raw emotion. What is it that normally gives you inspiration when writing lyrics?
Katon: From traveling with my band HIRAX I have been fortunate enough to see the worst and the best of people. I can say from experiencing different cultures, customs and traditions that I continue to evolve as a songwriter. I have the platform to raise awareness of these issues. I feel that people can learn from the experiences that I have had traveling the world. It is true that all men & women are created equal.

How has MySpace and the internet affected your band and do you think downloading helps or hinders the artists?
Katon: All of the social networking websites have massively affected HIRAX. In this day and age, it is very important to be involved with those kinds of websites. It is totally impossible to list all of the websites that we are featured on… but here are some: Facebook, Reverbnation, Last FM, Twitter, Orkut, Hi5, etc. and the most important one of all our homepage where people can get all of the newest HIRAX information, tour dates, as well as merchandise t-shirts, CDs, DVD, Vinyl, etc. I think that downloading totally helps the artists. There is really nothing that you can do about it… so you might as well embrace this technology.

The artwork quite amazing. How is it tied to the albums title?
Katon: The brilliant artwork was created by artist Ed Repka who has also done work with Death, Venom, Megadeth, Vio-lence, Municipal Waste, etc. The three characters are loosely based on the Face of Death the translation of “El Rostro de la Muerte” (español).

When you are on the road for a while I am sure you see and experience many different things you might not even have known existed. Are there any stories that stand out in your mind as being exceptionally strange or odd?
Katon: The military presence in Colombia. It is amazing how hardcore the government controls everything there. Our tour bus has been stopped so that armed soldiers could come on with machine guns at checkpoints. Sometimes in America, we take for granted the freedoms that we have. As a band we have been lucky to be able to see the things that we have seen. We feel very fortunate! Colombia is one of my most favorite places to play in. The people are great and the country is very beautiful!

What is the hardest part about being in a touring metal band and what is the biggest obstacle your band faces?
Katon: Not having enough time to play all of the countries in one year. Twelve months is a short amount of time to travel with as much as we do. Flying, buses, trains, vans, etc. takes a lot of energy and patience. The biggest obstacle would be money. Some of the countries are poorer than others. Money determines how many cities you can play… it costs money for travel- flights, gas, food, lodging, etc. Sometimes it breaks our hearts to not be able to play the smaller cities, because it is not within the tour budget. If it were up to us, we would play everywhere! No matter if the people were rich or poor. For us, it is all about the music and the fans. That is why we are still going strong after all of these years.

How do you maintain that level of energy and exuberance? You sound like you’re ready to go full bore every time you play.
Katon: Thank you. What we try to do is take good care of ourselves. Eat the right foods, exercise, workout and try to sleep when we can. We try to give 110% every concert we do because the fans mean so much to us and we really appreciate their support!

What does the future hold for you guys as a band?
Katon: A lot more touring, recording more studio albums, DVD releases and spreading our message of HIRAX music all over the world!  [ END ]