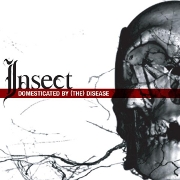 Insect – “Domesticated By (The) Disease”

“Dark to the core…Sharp as a knife” is the beginning of the overview for the band Insect’s latest album Domesticated By (The) Disease. Birthed underneath the dissonant skies of Montreal, Insect is another reason why Quebec may be the home of metal within Canada.

Insect’s Facebook page has their genera listed as ‘BlackCore’. Although not a true genera the term describes the band’s mix of black metal and hardcore perfectly. The album begins with a fade in by guitars backed by drumming on the toms. Soon after, when fully faded in, the guitars take on a solo mission of speed alternate picks. Everyone then joins in with a breakdown. The guitar work from Pascal alternates from heavy breakdowns to fast alternate picking to a vast amount of dissonant chords.

Cedric’s bass work backs up the guitar providing timing and filling in the higher pitches. Drums on this album, performed by Robin, are played slow like old black metal giving it a dark feel emphasized by the hard and fast double bass. To add to this black metal sound, vocalist Dave gives off lots of grungy growls which encapsulate you into the songs. Occasionally, throughout the album there is singing which is weak but at times can help mellow out the otherwise hefty ‘BlackCore’.

Domesticated By (The) Disease is a hard-hitting mixture of black metal and hardcore. I personally find this to be a great album with lots of energy and melodics. Any fans of Zao, Training For Utopia, Lamb Of God or Arise And Ruin should check out Insect.  [ END ]