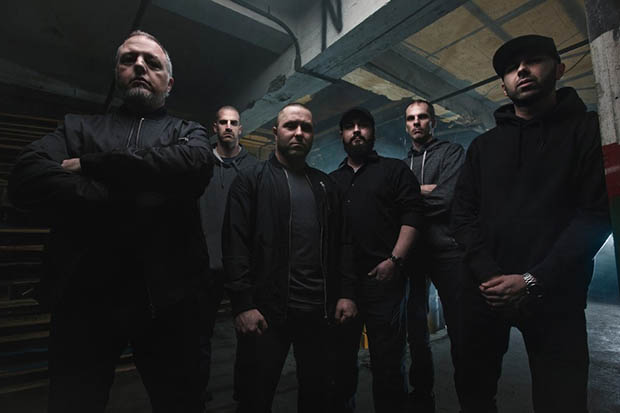 Despised Icon have been hard at work. They have a new album out called Day of Mourning, they just finished up a leg of a headlining tour and are currently touring the US on the Never Say Die tour with Winds of Plague and For Today. Even after all that, these boys have no intention of slowing down any time soon. With tour dates booked throughout North America and Europe right up into August, it looks like 2010 is going to be a huge year for Despised Icon. I recently spoke with guitarist Ben Landreville about all things Despised Icon.

The new album is crazy hard to say the least. Did you guys have an idea of what you wanted it to sound like before you went in to make it?
Ben: We wanted something gnarlier than the Ills of Modern Man. I think we achieved it really well.

Does the finished product meet your expectations?
Ben: Absolutely. It matches our vision of it perfectly. Couldn’t ask for anything more.

What did you do differently this time around? And did you learn anything from making this record that you’ll take when you make your next one?
Ben: We wrote a lot on the road, and I think it paid off really well in the sense that the songs have that extra edge. We’ll probably try and make it even more raw for the next one, since it’s what we like to hear and play.

You went back to your roots a bit and included two French songs on the album. Can you talk about why you decided to do that?
Ben: Simply to honour our friends and families, let them know that even if we’re not home a lot, we know where we come from and we’re proud to be from there.

What do you miss the most about home?
Ben: Mostly our friends and families, the comfort of an actual bed, clean bathrooms! But nothing major that makes us want to give any of this up. The road is our home in the end and we couldn’t do without it.

How’s the headlining tour going so far?
Ben: Super good. Really stoked about the turnouts. The bands are awesome, and the vibe is really good. Losing and making money playing dice, just having a blast every day.

Are you excited to take a break from it for the Never Say Die tour?
Ben: It’s not that much of a break since we’ll only be home for 2 days but yeah, definitely looking forward to sleeping in my own bed and seeing my family.

You guys have been on the scene for a while now. What do you think it takes to stay relevant in your genre?
Ben: Simply to do what feels right and sounds right to you because you love it and not because it’s cool.

One of the greatest things a band can do is cross genres as you do. What sort of opportunities has that given the band over the years?
Ben: To play with some of our favourite bands, like Suffocation or Terror or even Manowar!

What are the next big plans for Despised Icon?
Ben: We’re playing huge festivals this summer, we’re really excited about it. I’ve been dreaming about going to the Wacken ever since I was 14, and we’re actually going to play it… still seems pretty unreal to me! Besides that, a European tour with Parkway Drive, working on some new stuff. We’re keeping busy as always!  [ END ]