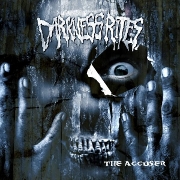 Exploding out of Kemptville Ontario, Darkness Rites boast a healthy mix of modern metal influences. Their music is best described as melodic death metal with an equal mixture of both the American and European scenes. The title track for example sounds like a mixture of The Black Dahlia Murder and Amon Amarth.

The relentless energy contained within the songs provides great motivation if used as a backing track while doing pretty much anything. Head banging remains in order throughout the album and there are blast beats galore for anyone looking for a solid ass kicking.

The production on The Accuser, courtesy of Cryptopsy’s Chris Donaldson, is crystal-clear, amazingly mixed, and absolutely modern. The drums in particular retain presence and size even though they are triggered and edited. The vocals are huge, and the guitars are sharp despite being warm and enveloping.

All in all Darkness Rites are on the right track. The only fallback on The Accuser is that at times it’s a little too reminiscent of other bands, and lacks its own distinct identity. It is however a very well written and well-produced album that is sure to give the band a chance to grow, expand their fan base, and further develop their sound into something that will be distinctly theirs.  [ END ]