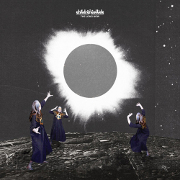 The Long Now is Children Collide’s debut album and it has received critical acclaim from all corners of the planet, and for me, the praise is 100% deserved. The trio, hailing from Melbourne, Australia, have created a fantastic indie rock record full of catchy, fast and infectious songs.

The album kicks off with “Across The Earth” which contains guitar distortion not far away from the early alt rock sound of Biffy Clyro and one of the first things that hit me, was the similarity of voice between Children Collide’s Johnny Mackay and fellow Aussie, Wolfmother’s Andrew Stockdale. While Mackay doesn’t get anywhere near the howl of Stockdale, there must be something in the water down there that produces that sound.

The music however, descends from an era far later than that of 70’s throwbacks Wolfmother and Children Collide could quite easily have been the opening band for Nirvana back in the early 90’s when grunge ruled the rock radio airwaves. Most of the songs, even those with slower acoustic beginnings, end up being high tempo, quality tunes with long but snappy solos on regular occurrence. “We Live In Fear” won’t create tremors in the music world, but it is quite simply, superb and the murky, distorted sound that emerges from the speakers has Sonic Youth written all over it and sounds different to everything else on the album. While Children Collide aren’t the most diverse band in the world, they do have a few different sounds, like previously referred to “We Live In Fear”, which keeps you more than interested. Best to avoid track ten, “Economy” though. I have no idea what they were trying to do, but it was completely out of place on the album. Screeching guitars and screaming vocals do not suit Children Collide and hopefully they won’t do it again.

Looking back at the last decade I feel there were many CD’s that took spin after spin to understand or to even start enjoying. However The Long Now is definitely not one of those albums. After hearing the selected single, “Social Currency”, which is just two tracks in, I could see why Children Collide have emerged as one of the most exciting and promising bands of the last decade. They’re definitely a band to look out for this coming decade and I’m hopeful that they can produce albums even better than this one as they develop their sound further. There’s something special about Children Collide and maybe in ten years time they’ll be fondly remembered by many a fan.  [ END ]