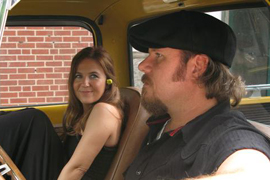 Husband and wife duo Ricky and Micol Davis, (better known as Blue Mother Tupelo) are preparing to release their latest effort, Heaven & Earth. This CD is chock-full of catchy melodies intertwined with southern rock and country music sensibilities that really draw the listener in. I recently spoke with Micol Davis (vocals, piano, tambourines, percussio) about the band’s music and their latest release Heaven & Earth.

Every band has its musical influences. What are some of the other bands and artists that have greatly influenced you guys and your music?
Micol: Tops for us are Van Morrison and Delaney & Bonnie (Bramlett). Stuff from the 60s & 70s, for sure. HoundDog Taylor, Del McCoury, Bonnie Raitt, The Allman Brothers Band, Otha Turner, The Raconteurs, North Mississippi Allstars, The SteelDrivers – they all have the type of raw emotion and unscripted approach that inspires us to continue being ourselves.

What can fans expect when they pick up a copy of Heaven & Earth?
Micol: They can rest assured that we loved making this music and that our hearts are there with them as they listen, sing, dance, and feel what they’re hearing. Maybe that sounds corny? Well, there is enough hatefulness out there that they can get from somebody else. Sonically, the sounds are warm and created with our own production. There is soul-country and hill-country, rockin’ Americana, and adult contemporary balladry. We hope fans grasp the spiritual celebration of humanity and life that we believe is a blessing of continual lessons.

The band keeps things interesting thematically. Can you talk about some of the subjects you tackle on this record?
Micol: Specifically, we approached financial issues, war, storms off the Gulf Coast, the joy our dog brings us, loving somebody, seeking answers to life’s questions and celebrating those answers and mysteries with somebody that you love, need and long for. Sometimes you just feel alone and blue. Sometimes you realize that you are not alone and it is okay to receive blessings from the Higher Power. One reviewer got it all wrong about our song “The War”… he said the loved one comes home unscathed… perhaps he should have taken another listen or two. It is not all peaches and cream; there is struggle. But, there’s reprieve, too.

Are there any songs on this disc that are personal favorites or that have good stories behind them?
Micol: Well, “Gustard Bellue” (written by Ricky) is a fun favorite because we have our nieces, nephews, and our dog, Gus, singing along with us, doing’ their natural thing – and a cast of special folk jammin along on banjo, mandolin, and fiddle, too. In addition, “Give It Away/Hard Times” is pretty cool because we have a major hero of ours on the recording. Otha Turner’s fife is heard here and his granddaughters, Sharde Thomas, along with the Rising Star Fife & Drum Band are featured in what we consider a tribute to them as well as a flat out true story about us. We were honored, as well, to pay tribute to Jessie Mae Hemphill with our rendition of her song “Hard Times.” The Turners and Jessie Mae are from the north Mississippi hills – a great source of inspiration for us.

What was the writing process like for Heaven & Earth? How long did it take? How many tracks did you actually write?
Micol: We don’t have a writing process… we write a song when we’re inspired to and if we get “lucky.” Moreover, some of these songs have been written a little while, such as our two co-writes: “Goin’ Down Midnight” and “Hand In Hand.” We moved to Nashville, had our only two writing appointments ever and came up with those songs. Thing is, it’s taken us some time to actually settle in to where we were in the right “space” and opportunity to complete this recording and create this album. Specifically, the songs “Heaven and Earth”, “Wandering Soul,” and “The War” were all written within a short span of each other and they came to me pretty quickly – within the last year and 1/2, I’d guess. “Tupelo” and “Always Lookin’,” now that I think about it, might be the newest of the bunch. “Runnin’ ‘Round” came to Ricky in a dream being sung by the soul duo Sam & Dave. “High In The Sky” came to me in a dream as a reggae song. We wrote all of the songs except for “Hard Times” (written by Jessie Mae Hemphill) and “Biloxi” (written by Jessie Winchester). “Ramblin’ Train” has been around longer than any of our other originals. But, please, don’t “quote me” on dates.

How does your live show differ from your recordings?
Micol: In our live show we allow ourselves to take time with a song and let the music breathe. Songs can morph into each other and take on a life of their own. Though we mostly play our own songs, there are artists and songs that we adore and cannot help but include in some sets. In addition, friends might sit in with us on various instruments like harmonica, banjo, fiddle, mandolin; but we do not get to travel with them, unfortunately. Sometimes we cannot afford to take a bass player along with us or a drummer and Ricky and I perform as a duo. Piano, Dobro, Martin acoustic and tambourines are always in the mix, and we rely on our voices a lot. The recordings have an array of these instruments, though nothing that we’d unlikely use live.

What is the toughest lesson you ever learned in the studio and on the stage?
Micol: Three things jump out at me right off the bat: Being able to hear; Being a good listener; and Being yourself. Those are some of the toughest lessons that we have had to learn both in the studio and on the stage. Everybody is a critic, some gentler than others. Nevertheless, we believe that music and the audience are best served when the performer can hear the sounds, the performers are listening to the sounds, and the performers are lost in the moment without concern for the sounds. Does that make sense?

What is your musical background?
Micol: Ricky comes from a family of guitar pickers and players that performed in rock, gospel and country bands together in and around Knoxville, Tennessee. He curled up in the bass drum during his daddy’s band practice, learned from listening and observing them, and basically grew up with a guitar in his arms. Eventually he played several different instruments in his own bands and in school, shredding to Muddy Waters, the Marshall Tucker Band and Jimi Hendrix all night long as a teenager. My music came from church and just growing up a Preacher’s daughter with a family that loved to sing. My great-grandmother played the piano and was a music teacher, so I guess I got that from her. I was only around her very early as she passed on when I was two or three but, I took to singing and pecking out tunes on the church piano by the time I was four years old. School choirs and a degree in music education round my background out for me.

What is next for Blue Mother Tupelo?
Micol: I thought creating music and following my calling as an artist was only a dream. Ricky and I have followed this dream and we believe in it. So many of our dreams have come true in this musical world and so many dreams we are still reaching for. We are going to keep pouring 100% of ourselves into our music as honestly and passionately as we can, hopefully connecting with others in a way that is uplifting and worthwhile. We are looking toward our next recording and believing that there is a definite purpose in what we are doing. Living day to day, gig to gig, paycheck to paycheck is an adventure and we are going with the flow. Next for BMT is more of the same and I say that lovingly with respect for the journey and thankful for the life we’re living.  [ END ]