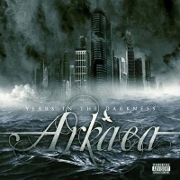 Arkaea – “Years in the Darkness”

When I first heard that Christian Olde Wolbers and Raymond Herrera (both of Fear Factory) were working on a new band with Jon Howard and Pat Kavanagh (both of Threat Signal) I was hooked right then and there. Alas, March 3rd, the original and promised release date came and went. I had to wait until July 14th 2009, when Years In The Darkness was finally released, to satisfy my curiosity over the fusion of Fear Factory and Threat Signal… ARKAEA.

Fear Factory: Christian Olde Wolber’s guitar playing on this record is like taking his work with Fear Factory and stepping it up a notch. Some parts got a bit more complicated and thrashy, leading him away from the sound he is noted for. This is a definite boundary push for Christian’s playing. Raymond Herrera’s drumming is still heavy giving the band his explosive sound behind the kit. One key part of this album is the foot work done by Raymond. He uses double bass to tear through parts keeping the songs interesting and aggressive at the same time. Usually when I listen to a metal record I like to air guitar. Instead, I tried air drumming the bass drum parts but never seemed to be able to keep up.

Threat Signal: Jon Howard’s vocals are another key part of this album. He brings in his ever so memorable high pitch screams into every song. In addition, his melodic singing voice is absolutely amazing. Many of the choruses are catchy and you’ll find you can’t get them out of your head. There is even a ballad called “Away From The Sun”. This debuts a new style of singing for Jon Howard which he pulls off well. Hopefully he’ll write more ballads in future albums. The last member to join Arkaea, Pat Kavanagh, provides his bass skills to this project. His parts on the album are simple but true and well done. They keep the song strong, stapling the instrumentals together.

Years In The Darkness is the first release from Arkaea and is definitely a great start for this new band. Hopefully there will be tour support behind this record while Threat Signal promote their newest release. This album is for fans of: Threat Signal, Fear Factory, Strapping Young Lad and Zimmers Hole.

Check out the song: “Locust”