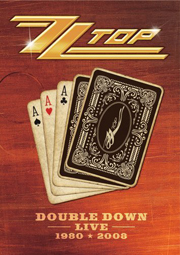 Fans of the ZZ Top, the legendary rock band from the state of Texas, rejoice. Double Down Live is what I would consider a definitive must-have DVD for your collection. The music business is notoriously hard to survive in and many groups that manage to carry on almost always undergo some sort of personnel change throughout the years. It is virtually unheard of for a band to be touring and releasing relevant music, with all of the original members intact, after nearly 40 years in the business. This is however exactly what the three members of ZZ Top have been doing.

Disc 1 of this package is a full-length concert filmed in 1980 at the Grugahalle in Essen for a German TV series Rockpalast. The band kick of the show with the bluesy, “I Thank You” and things get rolling from there. I have never had the opportunity to see these guys live but the thing I noticed immediately is their captivating stage presence. These three, larger than life characters/musicians dominate the stage just as well if not better than their contemporaries do with much larger bands.

All of the older tunes one would expect from ZZ Top are included in this performance. Songs such as “Cheap Sunglasses,” “La Grange” and “Tube Snake Boogie” take a new life in the live setting making them great big crowd pleasers. My favorite tune on this disc however is “Nasty Dogs & Funky Kings” for the very simple fact that it has one hell of a killer jam session midway though; I absolutely dig it.

Disc 2 was filmed during the 2008 world tour in various locations throughout Europe and The United States. I found it interesting seeing the band perform many of the same songs twenty-eight years later. They may have gotten a bit older and a bit greyer but their playing is just as remarkable as ever. The charismatic trio still put on one hell of a show only this time, with a more contemporary stage, the visuals are quite impressive as well.

Fans of ZZ Top will absolutely want to pick this up; your collection would not be complete without it. Even if you are not familiar with the band, Double Down Live is extremely entertaining and worth checking out.

Check out the song: “La Grange”