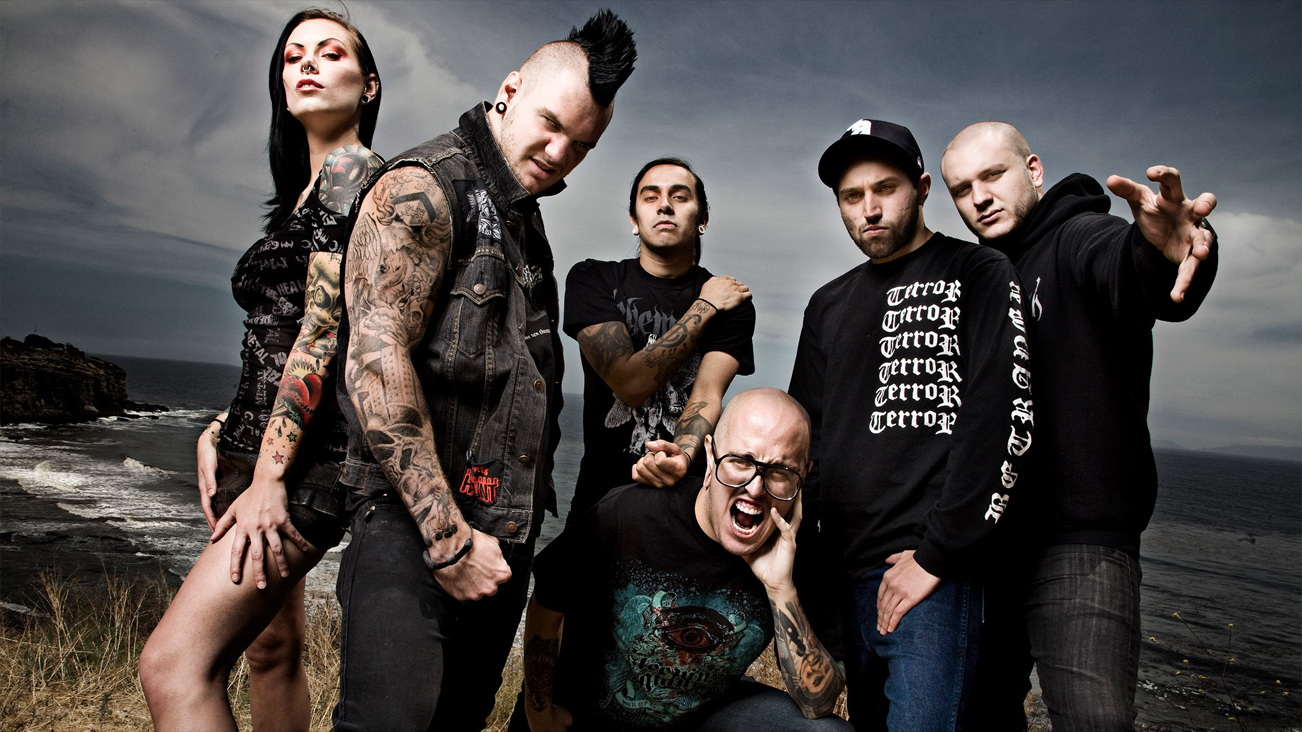 The California Love Tour Lineup: Winds Of Plague, Stick To Your Guns, Sleeping Giant, Oceano, Circle Of Contempt, On Burning Shores, Heritage. I got to the Reverb at 6:20, almost an hour after the doors opened and there was no band on stage. All I saw was some equipment set up and some Winds Of Plague art amps. Because of this I went upstairs to look at the merch that was being sold by all the great acts of the night.

About 10 minutes of looking at the tables passed and then I heard the live music begin, Heritage had just gone on stage. I had never heard/seen this band before so I was interested to see what they could bring to the start of such a fine night. Nothing too special, they performed the usual hardcore music with the addition of keyboards; a good pick for a show opener.

After Heritage, On Burning Shores stepped up on stage and delivered their music all the way from Moshawa (Mosh + Oshawa). I took interest in this band for the simple reason that they’re from the same region as me. They had a solid hardcore sound and their stage presence was energetic. Shawn their guitarist was headbanging pretty much the whole set. Their vocalist Mike was able to get the crowd to participate in singing along and in hardcore dancing the set away. Once these Moshawa kids completed their set it was time to clear the shores and start off the bands on the California Love Tour.

While waiting for On Burning Shores to get their equipment off the stage, I spoke with Reid Haymond of Stick To Your Guns. We talked about his band and some exciting news the band later shared with the crowd. I will announce this news when I talk about their performance.

Unfortunately, Circle Of Contempt, which was to be the first band to play from the California Love Tour, had trouble at the boarder. Instead Oceano stepped up to the plate, set up their banners in front of their amps and began to play. It wasn’t long before the crowd was right into the music. A big pit opened up where kids hardcore danced for the rest of the night. A good number of fans knew the lyrics to the songs so Adam Warren seized the opportunity and turned it into a sing along. The fans rocked to songs such as “Mandatory Sacrifice” and “District Of Misery” which was their closing.

Next on the program was Sleeping Giant. They set up their equipment and got right to it. Performing their hardcore music and professing their Christian faith, they announced their mistrust of the government. It was a funny blooper when the vocalist asked the crowd what they thought of Circle Of Contempt and finding out, right on stage, that his good buddies in C.O.C did not make it over the boarder in time to play the show. Oops!

After Sleeping Giant I revisited the merch area and noticed Johnny Plague sitting beside his table. I wandered over to congratulate him on his great new album and mentioned that I got to review it for PGA (Everyone should look it up after reading this review). I also got to ask him some questions about the album and inquire as to what great things are happening in their band. It was a disappointment to see that neither of their two albums was being sold at their table. If anyone wants to buy their albums don’t wait for a concert. Go to your nearest CD store and buy it there. The same advice goes for our next band….

Stick To Your Guns are touring in support on their latest release Come From The Heart. They opened with “Enough Enough” from their second album followed by songs off both of their releases. The crowd was definitely pumped for this band, singing every word to almost every song the band performed. The only song that no one knew the lyrics for was a song to be recorded soon for the band’s up and coming record. I said it… STICK TO YOUR GUNS – NEW RECORD – 2010. Excited? I’m sure you are; I know I was.

After getting such exciting news from Stick To Your Guns, I was sure all the surprises for the night were over. Was I wrong! I turned around and there was none other than Riku Haavisto of the Finnish band, Circle Of Contempt. I talked to him about how it sucked that he was held up at the boarder. He is a really nice guy and if anyone gets the chance they should go meet him.

After my talk with Riku, I turned my attention back to the stage and watched as Winds Of Plague stood on the side getting ready to go on. The song “California Love” by 2Pac, featuring Dr. Dre and Roger Troutman, was played on the P.A. speakers which was a good bit of humour given the name of the tour. They cut the song halfway and played the track “Earth” which brought screams of excitement from the kids. At this the band walked on stage and opened with “Chest And Horns” followed by “Soldiers Of Doomsday”. A few more tracks were played then Johnny Plague asked the crowd if they wanted to hear some old stuff. The crowd screamed and the band walked off stage. Two crew members came out and removed the amp banners revealing the Samurai images, from the cover of Decimate The Weak, painted on the front of the guitar/bass cabs. Then Winds Of Plague came back on stage and opened up with “Decimate The Weak”. The first note triggered a special effect of smoke shooting up in the air. More old songs were performed and then once again the band left. “The Great Stone War” played over the PA while the band hid on the sides followed by the band jumping right back on stage and more smoke as they performed their first single “The Impaler”. After a few more songs I thought the band was done. Not exactly, they came back to perform one more song which ended the show.

After the show I had the opportunity to speak with Alana Potocnik about her previous work in the bands Abigail Williams and The Breathing Process. She was kind enough to take time out of her packing to talk about her past projects and what they are doing now. Things are looking up for her in Winds Of Plague so watch out for Alana, she is a great performer. I promised Alana Potocnik I would say this in this review “she is a great girl and everyone should buy her some drinks cause she’s that awesome”. I have kept my word and so if Alana ever reads this, she can see I keep my promises, even if they’re jokes.

Now it’s the day after the concert and I am still astonished by such a great show. The California Love Tour is pretty much a plague going across North America and everyone should try to get to the remaining dates. They are amazing bands so; if you’re not able to catch them this time around I recommend you make an effort to see them on other tours.

Check out the song “Chest And Horns”