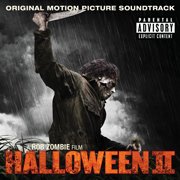 First off, a quick point for soundtrack producers: it’s all very well including snippets of the film in a soundtrack. Well, just about. Soundtracks like (and forgive me my non-rock related aside here) the Shrek soundtrack do it extremely well. I mean, what more could a kid want from a cartoon album than the sound of a donkey singing Ricky Martin? Even kids, though, have the attention span not to need a ludicrous snippet between almost every song. Making them the kind of snippets that will stop the CD being played anywhere but in absolute privacy or at a drunken Halloween party will reduce your albums rotation by a good 50%, even if the music is good. It’s also an extremely cheap way to bump up your case’s ‘track listing’ to 25 rather than the true total (13 – a far more apt number, don’t you think?), and you’re not fooling anyone.

Sex sound affects and irrelevant and out-of-place film snippets aside, though, this album does have its moments. The (real) opening track from The Moody Blues is seriously haunting, and the perfect dark soundtrack to a rainy, foggy, vampire-filled night. Any self-respecting rock fan will appreciate the tort trad-rock of Motorhead’s “The Chase Is Better Than The Catch”, and those with an appreciation of the more subtle end of the musical spectrum will be seduced by Nan Vernon’s lo-fi, full-moon track “Love Hurts”, which is genuinely touching. Even more so if you avoid listening to the ludicrous “I Love You Mommy” soundbite that precedes it.

There’s plenty of trash, too, though. Captain Clegg And The Night Creatures get two songs, yet are no better than a themed 80s cover band. Void’s “Time To Die” is at best a throwaway, growling almost-punk track, and those snippets… oh the snippets. Buy it from the bargain bin as a last minute soundtrack to a Halloween party, or – if you’re really desperate for those occasional highlights – hit up iTunes for a bit of Motorhead, MC5, The Moody Blues and Nan Vernon. These intermittent gems aside, this soundtrack is just not worth your time, and only scores as high as it does due to sporadic moments of musical interest.  [ END ]