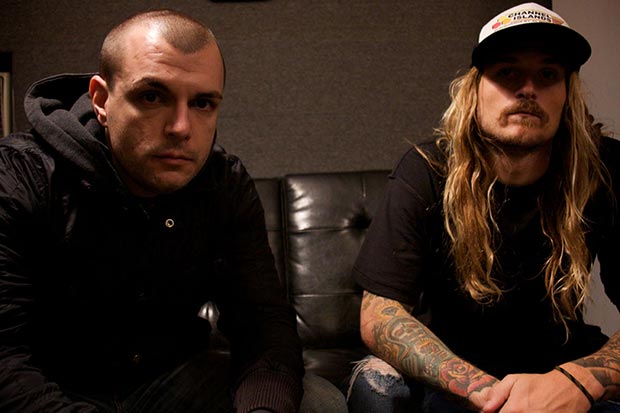 Deathless is the latest release from the Orange County, California Metal band Throwdown. This is a rock solid metal album that I feel is going to rank up there among the best metal discs of the year, at least in my book. I have been a fan of Throwdown for a while and I honestly feel the band is at its absolute best. The group is currently on the road touring the country with Bury Your Dead. I was able to sit down with frontman Dave Peters before a recent show in Richmond, Virginia to chat about the writing process that went into Deathless.

It’s early on in the tour but how is it going so far?
Dave: It has been great. We are out on the road with Bury Your Dead and we are sharing a bus with them so it is kind of an experience. They are friends of ours and we have known them for a while so it has been cool. The shows are mostly in smaller cities that we do not normally hit on a regular basis. It is cool to play places that we have never been to or that we have never heard of. It is killer and we are stoked.

Your brand new CD titled Deathless was released in November. Now that it is complete, how do you feel about it? Are you satisfied with the outcome?
Dave: Yeah we are. We could not be more proud or happier with the record. We have come a long way as far as production goes and this surpasses anything I think we have done in the past by a long shot. The whole songwriting process was pretty rigorous, we were home for about a year before we actually went into the studio and started tracking so it was kind of a long road and it felt really good to see it all come to fruition.

What was the writing process like for this CD? Did you guys all write together?
Dave: On the previous records I had written the majority of the material and the lyrics as well. On the last record, Mark, our guitar player had done a couple of songs. Being in the band and touring in the band is actually a different animal than writing with the band. This time around him and I pretty much split the writing down the middle and we wrote half and half.

You said it took about a year?
Dave: Yeah, the writing process is kind of like a contiguous process for us; it never really starts or stops at any particular time. Once we are done recording a record we might still have some parts or ideas floating around that did not quite make it in the process of one record. The writing is kind of a non-stop thing for us. We will have these ideas of maybe skeletons for a song and we will get into the studio and hammer them out.

From my perspective, the new material is significantly heavier and more aggressive than anything Throwdown has done in its existence. What brought on this newly envenomed attitude?
Dave: Yeah in a lot of ways this record is more blatantly heavy and raw than the records that preceded it. For this record, there are more open, bigger parts that rather breathe more so you have a larger more ominous feel to it. I think it really was a step in the natural evolutionary chain as far as songwriting went. We never set out to map out what we are going to do as far as a record goes. We are always just writing and this is just like a snapshot or a keyhole into who we are and where we are doing in our particular lives at that moment. In that respect think the record is different because life is ever changing and people are always growing and changing, as musicians as well.

Give us some insight into the record Deathless and the meaning behind its title?
Dave: Yeah, I hesitate to call it a concept record but it is a fanatic record. It is about death, life, survival, and the cyclic nature of life. With every ending there is the birth of a beginning and things are always kind of moving in circles. If you look across the song titles of the record each song is about some aspect of life, death and survival or is written in a metaphoric way about something else using death as a metaphor for an event or a person in my life. I think the title is much like record titles have been to us in the past. It is sort of a testament to the fact that our band has been around for ten years. With the climate of the industry and the economy where bands and labels are kind of dropping off like flies and trends are coming and going. The bands and the music that have inspired us have always been timeless and in that respect Deathless goes beyond these things.

How is the current economic slump affecting your band?
Dave: It truly is affecting everybody. I don’t know that there are many bands that can rely strictly on record sales these days.

What kind of preparation went into the live show?
Dave: We are a band that does not put on a large production. Especially on a tour like this where everything is sort of scaled down in the clubs and smaller towns. I think the biggest challenge for us as far as going into preparing for a tour is taking the songs, especially the newer ones and just adapting them to the live setting. On Deathless, we did a lot of guitar layering and orchestrated parts and since we are a four piece, it is always a challenge figuring out how we are going to establish that live. We just get in the rehearsal space everyday for a couple of weeks and before we head out and we make sure it is all nailed down. When we play live, we never want it to be a contrived kind of thing where everything is mapped out. We really like the spontaneity of a live show and the interaction between the crowd and us. It is less about us getting up on stage and performing for the people that are not on stage as opposed to just a bunch of people in the same room that we are just playing our songs for.

All of that passion that you play with must be tough on you physically. How do you prepare for the physical demands of a tour?
Dave: I don’t run or do anything like that as much as I probably should. I think the tour is what keeps us sharp. We tour so much that the preparation we do is from the last tour.

Do you expect to be touring a lot in 2010?
Dave: Yeah it is shaping up that way. We are definitely going to head out in January and February and hit some of the cities we have not gotten to on this tour. We have not confirmed it yet but we are hoping to head out with Five Finger Death Punch and Shadows Fall. I hope that it comes together. We just really want to head out and go to places and countries that we never go to. On the European tour, we went to Latvia, Estonia and Poland. It tends to be that these places are where some of the best shows tend to be.

Are you going to be playing a good mix of old and new tunes on this tour?
Dave: This is also a challenge that goes into preparing for a live show. We try to please everyone but that is inevitably impossible. We try to pick from the old records. Deathless has only been out for a few weeks now so we are going to play a couple of songs off of it but we really want to get up there and play songs that we can interact with the crowd. We do not want to brow beat them with new material. We will be playing a good mix of stuff from our last four records.

What is the toughest lesson you have ever learned on the studio or on the stage?
Dave: I think it is kind of along the lines of what I was just saying and that is you can’t please all the people all of the time. I am a perfectionist by nature whether it is making a record or in the live setting when you make music. If you draw pictures or create films or you write or do anything that is an art, anything you do is an extension of yourself and is a part of you. You are putting out what is essentially you out there for the world to judge; you kind of have to develop a thick skin. I am fortunate that I kind of went into this with a thick skin already. It is tough because you think that you are doing something that everyone is going to love and no on loves it or you kind of do something on a whim and people go crazy for it. It is kind of that volatile and strange nature of making music or any kind of art, I guess the lesson I learned is what I have always known is that you can only be yourself, take the good with the bad and as long as you are happy and proud of what you are doing then everything else is secondary.

When you have some free time and the band is off the road what do you like to do?
Dave: I like to spend time with my wife and family. Just regular everyday stuff like recreational eating and going to the zoo with my friends. I love Disneyland and my wife and I had Disney passes and we were going to Disney all of the time.

In a hundred years from now what will the music history books say about Throwdown?
Dave: I would like to say that if nothing else we were a band that during a strange and volatile climate in the music business, the world and the economy that we were a band that stood the test of time and we did not succumb to trends.  [ END ]