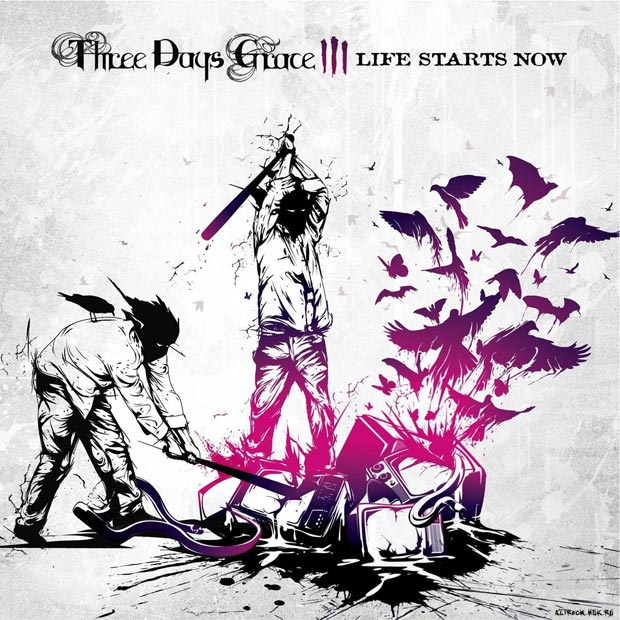 Ontario stars Three Days Grace have only managed three albums since forming way back in 1992 under the name Groundswell. With those kind of between-album breaks, it’s reasonable to expect quite a lot from their sporadic albums, and Life Starts Now more or less delivers. There’s a real hint of the break up album to their latest effort, featuring plenty of tracks lamenting the downfall of a loved-up relationship (“Bitter Taste”, “Someone Who Cares”, “Last To Know” and “Lost In You” in particular, though they’re far from alone). Three Days Grace seem to be in a particularly angst-ridden and slightly bitter mood, but they certainly know how to rock.

There’s a hint of Foo Fighters to their latest sound, though perhaps a tad less anthemic and more growling than Dave Grohl’s posse, while tracks like the infectious “Break” sound like Weezer in a seriously foul mood, emulating their “Hash Pipe” days, though with riffs just a fraction less compulsive. Life Starts Now is full of pulsing, leap around choruses, hefty riffs and melodic lyrics that reek of old-world rock, and it’s all put together quite exceptionally well, if in something of a radio-play inviting, easy to relate to manner.

The cover image of Thee Days Grace smashing the hell out of an assortment of televisions suggestions ‘Life Starts Now’ is a reference to anti-consumerist interest, but in fact it seems more likely to be a final stab at that woman who recently jilted… someone. Even hard rockers, it seems, have hearts attached to their well-worn sleeves. Three Days Grace haven’t become media darlings for nothing, though, and while this might not be either startlingly original or particularly inspiring, it is infectious, riff-tastic and far, far from dull.  [ END ]