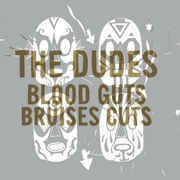 Since releasing this particular album, The Dudes have found its title to be something of a prophecy. Nine stitches, a bust leg, lost teeth and even the sacrifice of part of a mustache have followed the launch of their happy-go-lucky LP, which playfully explores their main concerns: girls (and how they might restrict their drinking sessions), rock and roll soul and the thought of ending up alone.

It’s an intelligent brand of old school, mellow rock the Calgary lads specialize in, funky and vocal-focused. It’s most likely to slide on to your CD rack somewhere alongside the likes of Barenaked Ladies, should they spend some serious downtime indulging in the jazz and soul classics, before indulging in a line of parties focusing heavily on drinking through funnels and jamming afterwards.

There’s something poignantly old-world about this particular crowd, yet they still manage to sound fresh, bringing a more traditional style of rock and roll up to the minute with witty lyrics and vocals tinged with emotion. The occasional hint of country sparkles with modern-day relevance and has enough varied tone to put most soulful rock bands to shame. If there’s one complaint, it’s that The Dudes are hardly the most original band you’re likely to stumble across, but then in making country-tinged, poignant rock meaningful and fashionable in their own small way, at least they’re doing something that’s a little different for now. Having said that, it’s more likely to please pop and edgy country fans than the more traditional rock lover.  [ END ]