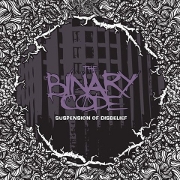 The Binary Code – “Suspension Of Disbelief”

Within recent years the progressive style of playing has been incorporated into all types of metal. Bands such as Protest The Hero, After The Burial, Opeth and Between The Buried And Me have been creating new techniques and opening doors with this very style of instrumentation. The Binary Code are no different and have capitalized on this musical trend and applied it to their songs.

Vocals throughout Suspension Of Disbelief are all low growls with a few higher screaming parts. These higher vocals help to break up the songs making the parts more distinguishable. Drumming on the album is original, going from heavy double bass drumming to simple high hat snare playing on the softer parts. The bass is simple and is a rhythm keeper for the guitarist overlay of complex riffs. Last, but far from least, the guitar playing from The Binary Code is phenomenal. The majority of the album is heavy guitar riffs that get very complex at times. It sounds like a mixture of Sammy Duet and Christopher Arp. Then, to keep your blood pressure within the normal range, there are soft clean guitar parts which mellow the listener out after the high, intense riffs.

This was the first time I was exposed to The Binary Code. You could say I was in suspense for Suspension of Disbelief. After hearing them I was amazed with the band’s talent. Metal Sucks will be putting this release out for people to purchase digitally. If anyone is into bands such as Born Of Osiris, Daath, Between The Buried And Me and Circle Of Contempt they should definitely purchase Suspension Of Disbelief. Also a note to all metal labels: if you are seeking a true progressive death metal band, this is a group you should try to sign.

Check out the song: “Suspension of Disbelief (Part I & II)”