Brief Bio: The Beatles were an English rock band formed in Liverpool in 1960, who became one of the most commercially successful and critically acclaimed acts in the history of popular music. For most of their history, the group consisted of John Lennon (rhythm guitar, vocals), Paul McCartney (bass guitar, vocals), George Harrison (lead guitar, vocals) and Ringo Starr (drums, vocals). Rooted in skiffle and 1950s rock and roll, the group later worked in manygenres ranging from folk rock to psychedelic pop, often incorporating classical and other elements in innovative ways. The nature of their enormous popularity, which first emerged as the “Beatlemania” fad, transformed as their songwriting grew in sophistication. The group came to be perceived as the embodiment of progressive ideals, seeing their influence extend into the social and cultural revolutions of the 1960s.  [ END ]

The Beatles: Remastered: We are delighted to announce the release of the original Beatles catalogue, which has been digitally re-mastered for the first time, for worldwide CD release on Wednesday, September 9, 2009 (9-9-09), the same date as the release of the widely anticipated “The Beatles: Rock Band” video game. Each of the CDs is packaged with replicated original UK album art, including expanded booklets containing original and newly written liner notes and rare photos. For a limited period, each CD will also be embedded with a brief documentary film about the album. On the same date, two new Beatles boxed CD collections will also be released.  [ END ] 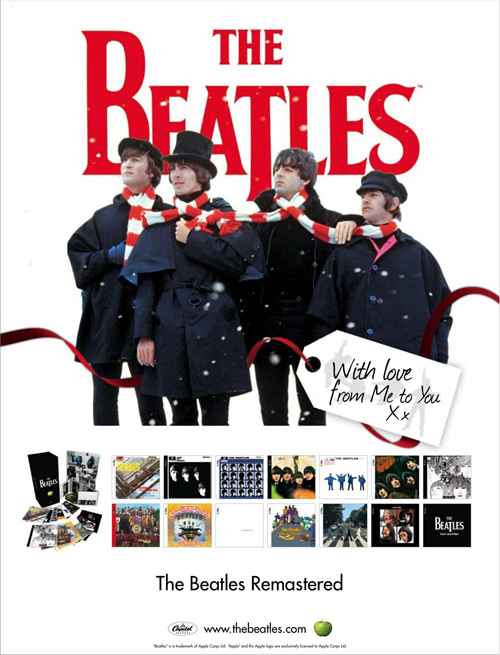 Prizing:
ONE (1) lucky Beatles fan will win a very special Holiday Poster. These are limited and now it can be yours for free. Enter today.