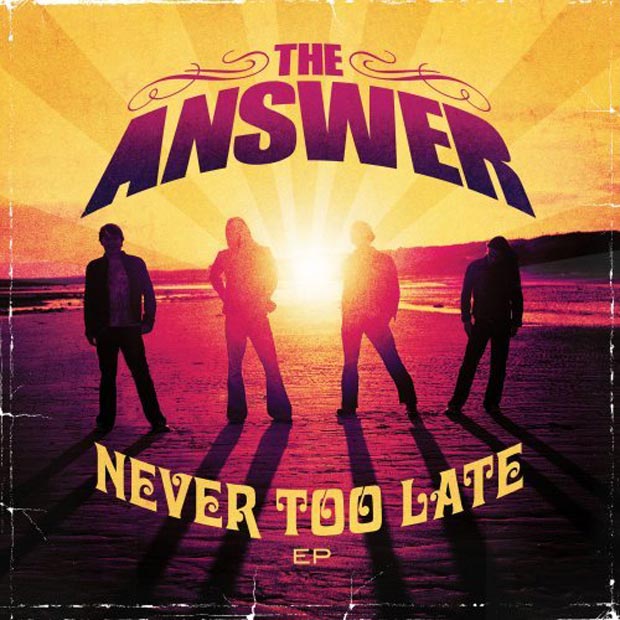 Northern Irish act The Answer’s debut North American EP Never Too Late is an opening salvo on the American/Canadian market, following significant commercial success both back home and in Japan. With international sales already topping 100,000 (including sales of 10,000 for the debut LP on the day of its release on Japan), The Answer is already well recognized in Europe and the Far East for their rambunctious old-school style rock.

Expect plenty in the way of riffs, strained but tight vocals, and a typical build up to a tuneful, soaring chorus in a similar niche to the likes of Thin Lizzy and Led Zeppelin. Second track “Highwater or Hell” is far more than a clever twist on a cliché, with several beautiful snippets of guitar solo, along with powerful vocals and plenty of hefty backing bass. “The Doctor” has a slower tempo and a bit of a sleazy vocal edge to it, while live track “Come Follow Me” – recorded in their second home in Japan – is accompanied by roars from the crowd and plenty of epic instrumental solos and feedback, giving an even more substantial larger-than-life sound, but maintaining the crisp edge that many acts lose on stage.

As the live opener on AC/DC’s ‘Black Ice’ tour, this is clearly only the start for The Answer, who are an act on the brink of real international acclaim. This EP could have been written at least three decades ago, but it’s so well done and intriguing that it still manages to sound fresh, and you’d have to be a true scrooge to begrudge them coming this far. It might sound like the 70s, but it’ll still leave you wanting more.  [ END ]