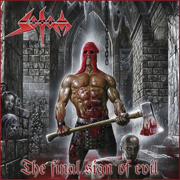 This two-year-old album finds the original lineup of Sodom – the one that brought you the classic EP In The Sign Of Evil – reuniting to recreate the tracks from that EP, as well as re-recording material that first appeared on the band’s earliest demo cassettes.

It’s an interesting album in theory, but in practice it comes off as quite a muddle. The only member of the group that seems to have been keeping up on his speed metal chops is bassist and vocalist Tom Angelripper. Makes sense as the 46-year-old has been the sole constant of Sodom’s nearly 30 years of playing hard, fast, evil metal.

His compatriots, on the other hand, fall well short of the mark. Even when leading the charge, guitarist Josef Dominic plays with a laziness that shows through with every limp riff and pseudo-solo. Worse still is drummer Christian Dudeck (R.I.P.) who throughout the album is stuck one half-step behind his bandmates, stumbling over drum fills and double-kick runs that, considering the speed and accuracy of most modern players, feel horribly lost.

Rather than trying to push the band’s older material forward, all this album does is leave the Sodom fan and neophyte alike juiced up to seek out the original recordings and to get a taste of how good it used to be.  [ END ]