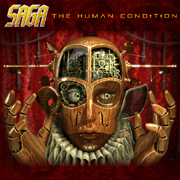 The Human Condition is the newest offering from modern rock band Saga. It has been a long time since I have heard anything from these guys. Back in the day they were a staple on the radio and on an early version of MTV, (when MTV actually played videos). I enjoyed their early material and It was with great eagerness that I dove into this disc. I was pleasantly surprised by the caliber of musicianship these guys are endowed with. The massive, multi-layered harmonies are the perfect accompaniment to the keyboard-tinged progressive tunes that make up The Human Condition.

As was the case with the earlier Saga releases that I am familiar with, these songs are immediately radio friendly and all of them, with the exception of the instrumental “Human Condition,” have the potential to be singles. This is a high-energy progressive/new wave/rock album that is packed with well-written, well-produced tunes that are more than enjoyable to listen to.

After listening to the whole disc, I am not sure I can single out just one tune that would be a favorite of mine. They are all quite good and I truly enjoyed each one of them.

There really is nothing bad to say about this album. I would recommend it without reluctance. While The Human Condition is not your characteristic metal fare, you probably won’t be banging your head and snapping your neck to this, but there is something on here for anyone who is a fan of good music. The playing alone on this disc is worth the price of admission and if you are a fan of solid, well-written, well-produced music, you will want to check this out.  [ END ]