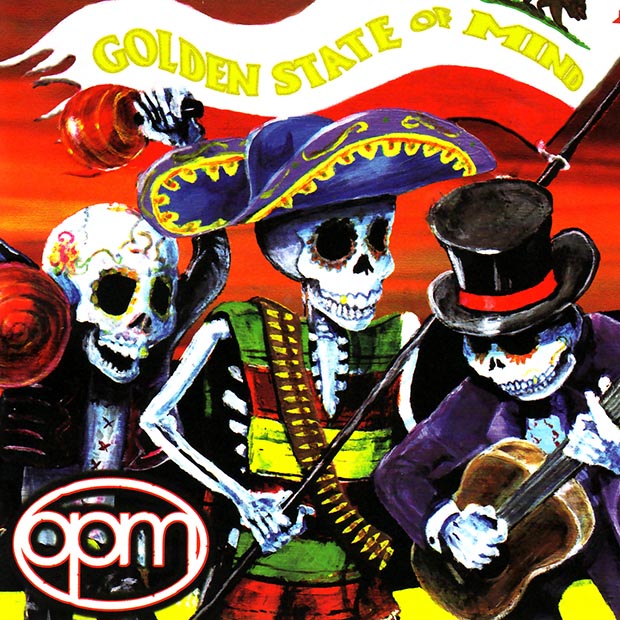 To the casual fan, the name OPM reminds of their minor debut hit “Heaven is a Halfpipe”, a catchy but throwaway single about their love of rolling around on a plank. Golden State Of Mind, though, shows the band in an entirely different light. With a straight up (and extremely laid back) reggae sound that comes to the fore, and featuring a host of guest artists, Golden State Of Mind is a bass-heavy piece of Rastafarian-themed music that brings a smile to the face.

It’s not a huge shock to learn that OPM go heavy on the drug references (after all, the band name’s not overly subtle, though it allegedly refers to ‘Open People’s Minds’ rather than the more obvious phonetic opium reference), but the high standard of Jamaican styles and infectious rhythms on offer from a band that’s international reputation is essentially ‘indifferent pop punk’ comes as an extremely welcome surprise. “Runaway” is an obvious stand out, with the dual-vocal chorus and rebel theme sticking in the mind long after the last muffled beat has faded. “Tell Me What You Want” is a pro-legalization cannabis song, with lyrics delving into social attitudes and a chorus straight from the mouth of a dealer (as well as a witty aside “look through God’s eyes, legalize these seeds”).

Forget any thoughts of pop punk, this is more reminiscent of Sublime, though it does pack a bit more of a punch in its hefty choruses. “Honey” crosses the line into what’s bordering on hip-hop territory, with a dirty edge. Post track five, there’s a bit of a downhill bend to the album, with a spattering of unconvincing sloppy skate punk and some slightly less infectious reggae rhythms. All in all, though, this is a convincing step into territory that you don’t expect OPM to grace, and despite its weaknesses, it’s a varied, lively effort.  [ END ]