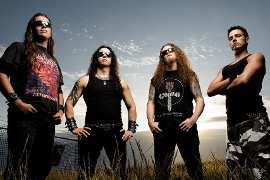 “The tour is rad and the fans old and new are the best part. I love putting this band in front of a huge crowd cause of the raw energy. But no matter if it’s a huge crowd or a small crowd we throw down just as hard and the fans are right there with us.” Those are the words of Johnny Ketlo, guitarist and vocalist for the extreme Canadian metal band Omega Crom. The bands newest release Blood, Steel and Fire is a damn good record that will have you snapping you neck with reckless abandon in no time at all. Currently the band is on tour in Canada in support of the CD. Busy as they are though, I was able to catch up with Ketlo who took a moment to answer a few questions for PureGrainAudio.

The name of the band Omega Crom is interesting to say the least and sounds as if there is a story behind it. Where did the name come from and what is the story?
Johnny: Back when we started we were going to call the band Crom which is Conan the Barbarian’s God, the Cimmerian God that brought steel to man and was also a Giant Slayer. There were like five other bands called Crom so we were looking to change the name but nothing was cool until one day this girl named Shawnee said, “Why don’t you call the band Omega Crom”. Omega being The End or Final and Eternal, Thus Omega Crom “The Final and Eternal Slayer of Giants.” I have always been a huge fan of Robert E Howard novels and The Savage Sword of Conan comics so this name is very inspirational for me.

What was the writing process like for this CD? Did you guys all write together? How long did it take?
Johnny: I wrote most of the music and lyrics. Some songs I had for years, some were more spontaneous. Some tracks like, “The Passing of Azazel,” “Battlefield” and “Parliament of Stone” were joint efforts where we put our brains together and wrote as a unit. It was a long process from writing to recording because of band line up changes and limited funding but I never stopped striving and eventually slayed.

The band keeps things interesting thematically. Can you talk about some of the subjects you tackle on this record?
Johnny: Well you got tracks like “Battlefield” telling about the purity and glory of hand to hand combat when you had to look your foe in the eye, not this three against one bullshit gang mentality that is so apparent in the world of today. “Calling of the Dead” deals with political, societal, and religious hypocrisy which are the archetypes that sponsored the failing system, hurling us all toward the brink of obliteration. ”The Passing of Azazel” is a theological effort more theatrical from the first person point of view of a fallen angel.

“The Prisoner (The Drawing)” is inspired from Stephen King’s Dark Tower series. “Playing God” paints a picture of malpractice and rogue science. “Parliament of Stone” is straight up Swamp Thing comic stories, which also outlines mankind’s relationship to the Gaian mind and how out of sync we’ve become with the earth and the cosmos. “F.F.O.H.T.L” is a basic ass kicker, a chance to rip it up in the mosh pit. “Metal Revolution” is an epic about touring, shredding and the primal connection of battle and metal. The album is called, “Blood, Steel and Fire” which synthesizes all these ideas nicely, at the end of the day people will take it to mean whatever they want and that’s cool.

How is the tour going so far?
Johnny: The tour is rad and the fans old and new are the best part. I love putting this band in front of a huge crowd cause of the raw energy but no matter if it’s a huge crowd are a small crowd we throw down just as hard and the fans are right there with us.

What is the hardest part about being in a touring metal band and what is the biggest obstacle your band faces?
Johnny: Because this band is independent the hardest part is booking our own tours and managing the expenses as well as staying focused in our directives.

How has MySpace and the internet impacted your band and do you think downloading helps or hinders the artists?
Johnny: Yeah MySpace and downloading helps Indie bands huge. The music industry today is in a place that has never been seen before and you have to learn the new way or get left behind. The process has been greatly sped up and reaches farther than ever with an advanced number of curves, like fuel injection.

How quick are you in the studio? Can you usually knock things out in a couple takes?
Johnny: In the studio some things get done in one take, some things have to be worked and reworked, especially in technical metal, let’s face it this isn’t punk rock. It’s a great feeling when things click and get done in one take and there’s more than a few of those moments on this CD.

What is your musical background?
Johnny: My first inspiration to pick up the guitar was AC/DC, then I started getting into Metallica, Megadeth, Slayer, Sepultura, Pantera, later when I moved to Vancouver I was introduced to Grindcore and Black Metal which was an eye opener. Then I began studying Classical guitar working towards a bachelor degree. I always liked Judas Priest and Iron Maiden and that was where the vision for the vocals in OC developed. I wanted to have death and power vocals. My background with the choir in college helped with that as well and so did my love for Sepultura. Later I got into Blind Guardian, Ayreon and Avantasia, really, there is too much influence to name and it is just getting more and more. Vinnie Moore, Angus Young, Jason Becker, Yngwie, Zakk Wylde, Dimebag, Augustin Barrios, Bach, Beethoven, Scarlatti, Halford, Dickinson, Anselmo, Cavalera, Sammet, the list goes on.

What is the toughest lesson you ever learned in the studio and on the stage?
Johnny: The toughest and most costly lesson for the studio is to be prepared, do pre-production. On stage, first gig we ever played opening for Thor I got up there totally adrenalized started wind milling like mad and almost passed right out. After that I always remembered to breath.

Are there any songs that are personal favorites or that have good stories behind them?
Johnny: “The Prisoner (The Drawing)” was the first song I ever wrote, and I thought it was good. I moved to Van, jammed with some grindcore bands and realized I had to take it back to the drawing board and make it more brutal. “Metal Revolution’s” intro riff was written by a friend of mine after his girlfriend had passed in a car accident, he told me to take it and write an epic so I had that riff for years and another I wrote sitting on the steps my first day at college on a classical guitar, never forced it and eventually it wrote itself. That’s how it goes sometimes you take riffs you’ve had for years and marry them with something you just wrote that day and there it is, the song is finished.

What does the future hold for you guys as a band?
Johnny: We have another albums worth of songs to record and we’ll be touring as much as possible. Our mission is to go across Canada into the States, then Europe and Japan, all the while releasing new material. We are currently in the process of booking the cross Canada Tour for spring time 2010.  [ END ]