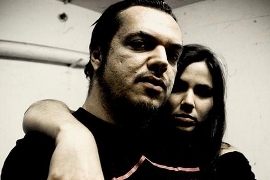 Once you go metal, can you go back? If you are Igor “Iggor” Cavalera, former drummer (and founding member) of Brazillian death metal band Sepultura, then the answer is an obvious yes. Him and his wife/producer Laima Leyton have gone on to form Mixhell, merging dirty electro sounds with Iggor’s ferocious live drumming. The group has become quite popular among the French House/Justice clique but they’re no fad. They’ve banged out a number of syncopation heavy remixes for the likes of NASA, The Faint, MSTRKRFT, Chromeo and more while their own tracks are tearing up dance floors from Pakistan to Portugal. Recently I was able to speak to the duo about all things Mixhell.

How did you two meet?
Iggor: We met at a club called The Edge, in Sao Paolo. They play underground techno usually but they also have a rock night on Mondays. One night, I went to see my friend play some Nu-Wave and Punk music and Laima happened to be there as well. We were eventually introduced by a mutual friend and we started going out, eventually forming Mixhell, but mostly by accident. We never planned to be where we are right now. I had just left Sepultura, and before even dating Laima, I wanted to talk to her about getting a job at the Museum of Modern Art where she used to work. I was like “Fuck music, I’m sick of this shit. I’m just going to work at the museum and hang out.” But then the Mixhell thing just went like, pow!

Laima: He took me out of the museum and brought me in to music.

Iggor: I brought her to the dark side!

Were you a bit of a DJ yourself?
Iggor: Her sister was.

As a drummer, do you find there is some crossover with DJ-ing?
Iggor: It’s weird, because the more I think about it, there are so many drummers in this world that DJ. Like James Ford from Simian Mobile Disco or James Murphy from LCD Sound System. So many drummers are doing this thing. I think the beat connection is definitely part of it. I’m not saying that you need to be a drummer to be a DJ but I think the beat connection is a strong part that can lead you into this world. When you’re making beats for rock music, it makes total sense to make them for something else. It grows even bigger because I think rock is limited to mostly guitars and bass. With electronic music, we mess around with so many sounds. You can put our kids on the synth, or sample feedback from a punk record and turn that into a loop. There are so many options, it’s amazing.

So why the electro sound?
Iggor: I don’t’ know! When I started messing around first, I was listening to a lot of Def Jam hip-hop but electro is just so dirty… and messy.

Laima: It’s like when Justice made the ‘Waters of Nazareth’ album, it was just totally pushing the limit of what it was. Those guys had metal and dance music on the same tracks.

Iggor: I remember when we played this festival once and we were doing a sound check. I put one of their tracks on and the sound guy was like, “uh, I think you’re record is fucked up!” That was the best compliment I could ever get. I later told Xavier about that, and he said that was exactly what they were trying to do with it. This is the limit, and we are going to go way up here, [gestures with hand]. And if it’s fucked up, we don’t care. That’s kid of like the metal and punk attitude that we had back in the day with Sepultura.

Laima: The electro had the same attitude. It wasn’t just house music, or rock, it was something else. That was the most tickling thing for us. It’s not only about being nasty and dirty, but it’s about the crossovers. Like, LCD Soundsystem isn’t a House crew or a Nu-Wave band, it’s something in between. We loved that model.

Iggor: When we try to describe what we do with Mixhell, we get lost. Our sound has so much shit going on in it, but I think that once we find a label for its time to go somewhere else.

Ya, I like your MySpace description with the “tropical/grindcore” tag.
Iggor: Haha, yah that was really funny. I could never come up with shit like that. We just used the pre-existing tags they give you. I was like wow. Tropical? Ya! Grindcore? Maybe!

So what is “Boom Da” about?
Iggor: it’s the Portuguese word for butt.

Laima: I hate that word.

Iggor: With “Boom Da”, it was weird because we had these forgotten beats that we were messing around with. This guy Oh Snap! from Baltimore asked if he could sing over it. He came up with the whole rap thing using the Brazilian words. It was totally unplanned and underground.

Have you thought of doing any Sepultura remixes?
Iggor: I wish! But we don’t have the parts, they were all done with tapes back in the day. Someone did an edit of “Roots, Bloody Roots”, which is amazing, but it was never finished. So, maybe, if we find the parts, I’ll do it, but it would be boring for me to just do an edit. I want to get into the guitars, bass, drums, and chop it.

How is the album coming along?
Iggor: It’s so hard because we have so much live stuff going on. Every time I start to write something, we get offered another gig overseas, and we don’t want to miss out on that sort of thing. Hopefully, we’ll start writing music after Christmas. We have a lot of material, but it’s not very organized.