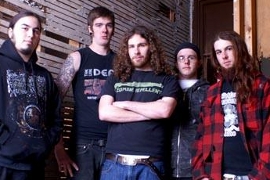 The metal scene in Southern Ontario is on fire. At the forefront of a legion of bands pouring gas on the flames is Misguided Aggression, a Woodstock-native 5-piece known for their high-energy live shows, crushing grooves, and tireless work ethic. Guitar player Ben Dobson stepped out of the band’s whirlwind schedule for a moment to answer some questions and let us know what’s up.

How would you describe the sound of Misguided Aggression to our readers who are just now discovering you?
Ben: I would describe our sound as a gnarly combo of Meshuggah and Lamb of God, with a bit of Pantera thrown in. It’s our own kind of dirty-old-school-meets-techy-riffing style. We strike a balance between challenging ourselves technically and making sure we have a good time. We believe in sweet riffs, because what would metal be without riffs?

What is your writing process? Who brings in the music, the lyrics?
Ben: Randy (Allcock, guitar) writes a lot of the guitar stuff, but John (Godfrey, bass) and I also bring in things. Then we jam it out as a band and move things around to put a song together. Rob (Demedeiros, vocals) comes in with lyrics afterwards.

The title of your debut album is Hatchala, which if I am not mistaken is the Hebrew word for “beginning”. How have things changed for you since the release of this album?
Ben: Since the album came out we’ve had tons of opportunities to play on much bigger shows, and more frequently. We’ve been able to keep a solid schedule and promote our music at the next level compared to what we were doing before.

Continuing on that line of thought, what do you feel being on a label has changed for you guys? What would you recommend to new bands looking to get signed?
Ben: Being on a label has given us a vehicle with which to get our music out there. It also frees up of the financial burden of having to magically come up with money to pay for pressing, distribution, promotion, etc. The only thing I can recommend to bands that are looking at signing with a label is to make sure they know what they’re getting themselves into. They should read the contract thoroughly, and be prepared to work their asses off because the money to put out records isn’t free, it has to be paid back at some point. That’s one thing a lot of bands don’t understand I think.

A video was produced for the track “Our Kingdom Come”. Can you let us know a bit about that process and what it was like?
Ben: The video is about a guy who is dealing with a lot of bullshit at work and at home and basically enters an underground fight club (the video takes direct inspiration from the movie Fight Club). He engages in a match and envisions his opponent as his co-workers. The video helps capture the angry essence of our band very well. Although it wasn’t grueling to make for us by any means, we owe a lot to the actors and all the extras because the fight scenes took a great deal of time and work to film. The filming of our performance was fun although it got a little tiring headbanging over and over to the same song. [laughs] You have to capture the most intense shots possible. It was a great experience overall and we’re extremely happy with Chad’s (Archibald, director, Black Fawn Films) work on it. Check out the video at this location.

It has been said that the video also mirrors the energy of your live shows. What are your goals on stage?
Ben: I think to us the most important thing live is to have a good time and just let loose. Hell it’s just music, it’s meant to be for fun. Our goal live is for the people watching to have as much fun as we are!

What’s in store for Misguided Aggression in the next year? Any writing, recording, touring, or other plans?
Ben: We’re currently writing a new album. We have tons of new material that we’re really excited about. We’re hoping for a new release before next summer. We’re also in talks right now about organizing a full Canadian tour around the same time.

Any last words?
Ben: Come out and party with us next time we’re in your area; we always love a good party. And keep checking back because we have new brutal tunes coming soon!  [ END ]