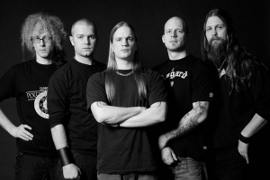 The new video for the song “Vetrarmegin” (English translation: “Winter Force”) from Swedish Viking metallers Manegarm is now posted for all the world to view. The song comes off the band’s latest full-length, ‘Nattväsen’ (“Night Creatures”), released in November via Regain Records. The video was filmed by Standard Film Team (Dark Funeral, Plector, Zonaria etc.) near the band’s hometown of Norrtälje in a “Viking village” said to have an incredible pre-renaissance atmosphere perfectly suiting of the song’s theme. Check out the video below.

Recent Testimonials: “Månegarm comes complete with much of the medieval, pagan metal accoutrements found in the Northlands of Europe: triumphant rhythms meant for mead hall celebrations, harsh and clean vocals, rolling gallops and the occasional classical instrument such as a violin. Although the group brings out the occasional classical get-down, Månegarm doesn’t showcase the myriad of ethnic instruments of modern pagan/folk metal bands Turisas or Eluvitie. In doing this, the group can’t hide boring riffs behind an orchestral curtain. It’s nice to see Månegarm keeping the Nordic metal tradition alive with Nattväsen.” — Blistering

“…this collection of night creatures might just encourage you to toss back a pint and go racing into the neighboring hills with sword in hand — at least until you get arrested for disturbing the peace.” — Hellbound

“…a solid album in the pagan/Viking genre, worthy of the attention of genre fans.” — Metal Runs In My Veins