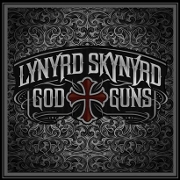 Nothing says Southern Rock quite like Lynyrd Skynrd. They have pretty much become synonymous with the genre after having been major players in defining it decades ago. It is virtually impossible to speak about Southern Rock without at least mentioning Lynyrd Skynrd in the conversation. I grew up on Skynyrd; in fact, I wore out at least one cassette copy of Street Survivors in my formative years. Therefore, it was with great anticipation that I dug into the bands latest release, God & Guns.

Everything one would expect from a Lynyrd Skynyrd CD can be found on this disc. As the songs played, I found myself in a familiar place, feeling as if I were revisiting an old friend. The thing that strikes me the most is how their sound is timeless and their songs are extremely approachable; they are written about everyday trials and tribulations that we all go through, making them incredibly easy to relate to. The bands unique unpretentious approach to songwriting is accented with tons of hooks and incredible musicianship.

Each time I listened through this disc, and believe me there were many, I found different nuances and subtleties that just made this disc so great. I am hard pressed to find a song on here that I do not like, but I am particularly fond of the hard rocker, “Skynyrd Nation,” it just seemed to stick with me long after I finished listening.

The other item worth mentioning here is that even the slower tempo tunes such as “Unwrite That Song” and “Gifted Hands” are really good and at times moving songs. You don’t have to be a hardcore Southern Rock fan to appreciate the music of this legendary band. I feel that the tunes on Gods & Guns transcend genres so completely that they should appeal to fans of good music in general.  [ END ]