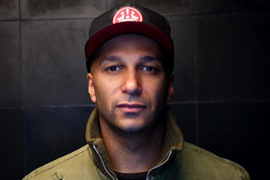 To coincide with International Human Rights Day on December 10, LimeWire Store releases ‘Live at Lime with Tom Morello’, available only at LimeWire Store. The Grammy Award-winning Morello performs two outstanding covers: “Human,” originally released by The Killers in 2008, and “Joe Hill,” a classic folk song based on a poem written by Alfred Hayes in 1925 about Swedish-American labor activist Joe Hill. In keeping with his dedication to human rights, all net proceeds from ‘Live at Lime with Tom Morello’ will go to Amnesty International, an organization Morello proudly supports.

‘Live at Lime with Tom Morello’ was recorded and mixed at Galt Line Music in Los Angeles by Eric Robinson and produced by Marshall Altman. Tom Morello performs guitar, harmonica, and vocals on “Joe Hill” and “Human.” “Human” also features David Gibbs on guitar and Eric Robinson on piano.

An accompanying Video Interview features musician, artist and activist Henry Rollins in an exclusive conversation with Morello. Taped on the day of the recording, the interview features Rollins and Morello in the studio discussing a wide range of issues including Morello’s involvement with Amnesty International, activism in music, and President Obama.

“It’s not every day you get to assemble such a high-caliber group of folks and produce something as cool and meaningful as this Amnesty benefit,” said Tom Monday, LimeWire’s Director of Partner Relations. “Morello really walks the walk—he speaks his mind and supports causes close to his heart. We’re beyond excited to be working with him. And having Henry Rollins participate is absolute gravy.”

Karen Scott, Amnesty International’s Music for Human Rights Program Manager, said: “The people at LimeWire Store have been a pleasure to work with and everyone involved put their heart and soul into this project. Both Tom Morello and Henry Rollins are dedicated activists and supporters of Amnesty International and the fight for Human Rights. You can really hear and feel their passion both in the music and in the interview.”

Human Rights Day is celebrated annually across the world on December 10. The date was chosen to honor the United Nations General Assembly’s adoption and proclamation, on December 10, 1948, of the Universal Declaration of Human Rights (UDHR), the first global enunciation of human rights.
Tom Morello is a Grammy Award-winning American guitarist best known for his tenure with the bands Rage Against the Machine, Audioslave, his acoustic solo act The Nightwatchman, and his latest project, Street Sweeper Social Club. He was ranked #26 on Rolling Stone’s “100 Greatest Guitarists of All Time.” He is also an outspoken political activist.

Live at Lime with Tom Morello: The Nightwatchman: