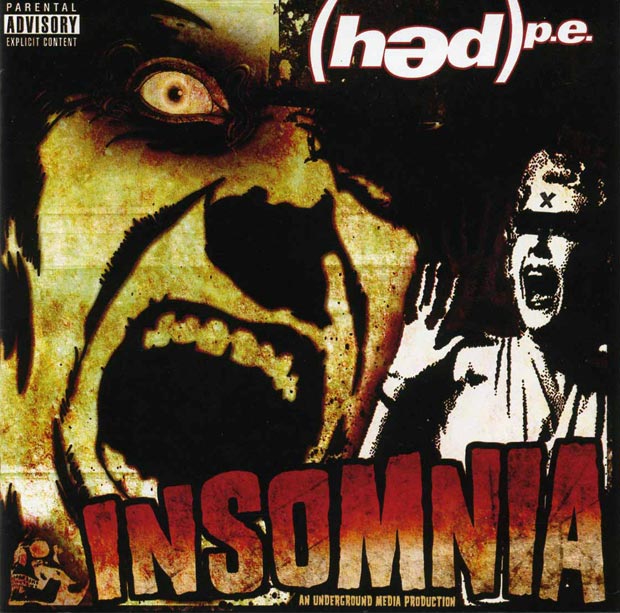 Despite a somewhat awkward critical reception, and metal fans lined up around the block to slam them, it’s hard not to be at least a little in awe of (Hed) P.E. After all, hip-hop and growling metal is a brave mix, and one that in 2000’s Broke album they forced together in a way that deserved far more credit than it ever got, as well as bringing together otherwise exclusive genre fans at their gigs for one huge love in.

While Broke was an ill-credited work of genius, though, Insomnia sees (Hed) P.E.’s childish side on the loose, and at times it’s seriously ugly. In “Game Over”, for example, there are plentiful references to sex with groupies, anti-consumerism, drugs and the chorus line ‘Oh, I need some head’. Perhaps more irritating than the lyrics, though, is the fact that musically (Hed) P.E. still sound interesting and edgy. The insistence on surrounding their music with ludicrous lyrics aimed solely at highlighting their own status as being ‘reckless’, ‘dangerous’, ‘different’ and ‘anti-corporate’ (it all sounds very forced) as well as relentlessly hostile towards anyone who might show emotion (anti-emo overkill) and insisting that their ‘indestructible’ overshadows their musical ability entirely.

Throw in an insistence on using ‘nigga’ ever thirty seconds and RTO’s unnecessary gay bashing, and you’ve got yourself an album that’s occasionally musically enticing, but topically fluctuates between dull and downright offensive. It’s a real shame, as apart from “Walk On By” (which edges into Limp Bizkit like rap-metal territory), Insomnia had the potential to be seriously good. There are elements of rap, hip-hop, metal and even hardcore, but the persistent attempt to be ‘extreme’ defies the lyrics of any meaning whatsoever, and gives this album next to no shelf life.

There is the occasional exception: “Tiananman Squared” (yes, they have managed to mis-spell the name of the famous Beijing resistance spot) finally gives a much needed meaningful political edge to the lyrics, though the backing track is far from their most inspired. “Children” sees an element of pop and a catchy beat creep in, too, but it’s too little too late. (Hed) P.E. need to look back at the outstanding “Swan Dive”, “Killing Time” and “Waiting To Die” from the Broke album and re-focus themselves entirely.  [ END ]