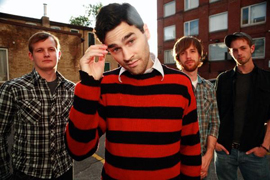 A couple towns over from the small town where I spent the initial 18 years of my life is the town which conceived the band known as Crush Luther. The band that brought you the hits “City Girl” and “The Cools” is back with a brand new album which was released October 13, 2009 on High 4 Records. I had a chance to ask lead singer and guitarist, Luther Mallory, a few questions regarding the new album, videos, their use of social networking and what the future has in store for the band.

It’s been a little over one month since you released your newest record Some People Have No Good To Give, how are you feeling about it now that it’s finally available to the general public?
Luther: Playing shows after you’ve released a new record is curious because you get to see how people are warming up to the new material and which songs are tickling people the right way. We recently played the Mod Club in Toronto and there were plenty of people calling for, and singing along to, new songs. That’s a good feeling. It means we haven’t lost our minds and released something awful thinking it was great. Reviews have been amazing as well so we can relax a bit.

You’ve played several shows since its release, how are fans responding to the new songs in a live setting?
Luther: I may have accidentally just answered this. We’re getting a sense for the stand out songs on this new record. The response has been better than we could have expected!

You experienced success off the first album pretty quickly, do you think this album’s tentative success will be able to top that of your self-titled debut?
Luther: I doubt we’ll ever be a band with records laden with hit singles, it’s simply not the way we approach writing. “City Girl” and “The Cools” both surprised us with how well they did. I still don’t know if we’ve written our “How You Remind Me” launch-pad hit single but I do feel like this record is stronger than the last in that sense. I’ve Facebook messaged Mick Jagger asking him to take us out on tour. If he says yes then we’ll be in a much different position. Just waiting for my friend request to go through.

On your YouTube, there is currently a video teaser for the track entitled “A Light” off your new album. When and where will fans be able to view the full version of this video?
Luther: Very soon. We shot it in October and we’re waiting for the final edit to come back. Our director, Christopher Walter’s shot the concept stuff for the video out of the country and he’s piecing it all together. It’s a bit of a heavy story-line that requires some finessing. The fans will have it seconds after we do.

How has the recent line-up change affected the band, if at all?
Luther: The new members have really turned what we do inside-out. There is a new dynamic and new musicality with Ryan and PJ that has really put us right in the pocket of what we should sound like. PJ is one of the most fluid, graceful drummers I’ve ever heard and Ryan has this amazing harmonic sense when writing his parts and is probably a better singer than I am. We’re very lucky to have players this good.

You incorporate a lot of social media into your band’s promotion (i.e. Vlogs, Twitter, MySpace, Facebook etc). Do you feel this is a good way to connect with fans and why?
Luther: It’s an easy, fun way to keep in touch with fans and give them a sense of your personality. We’ve always concentrated on keeping our live show all about having fun with the audience and telling stories and just generally letting them see what kind of people we are in between songs. These social media outlets serve as an extension of that.

You actually reply to your fans as well, do you feel this is an important aspect of your online presence?
Luther: Getting personal with our fans is by far and away the most important part of being in the band. All it takes is a little extra time and some genuine interest. It turns me off when bands hit you back with some cut and paste email response. Our fans have bought stock in us by coming to shows and picking up our records. What better evidence could there be of your compatibly with someone then the fact that they really dig what you do creatively? These are people that I want to know personally and we’re very careful about taking the proper time. Sure it gets harder for huge bands with a billion fans, but for us, right now, it’s very manageable.

I’ve played it, but would you care to explain the “Crush Luther Video Game” available on your official website?
Luther: [laughs] I forgot about that and it’s probably still full of bugs. I really wanted a dumb little re-playable text-based game for our website. Something people could play all the way through in 30 seconds and then start over to try and beat the high score. Ideally, we’d give prizes to the person with the best score of the week or something but it has yet to be really totally “finished”. The more fun version is trying get the “worst” score as opposed to the “best” score. You just mash the key pad endlessly. I doubt anybody could beat PJ. He’s a maniac at it. At the very least it’s worth it to hear the music. I was really proud of my work on the game’s original soundtrack.

Does the game serve any specific purpose or are you trying to poison the minds of children everywhere in your attempt to take over the music industry prior to fulfilling your ultimate goal of taking over the world?
Luther: I read a book once about subliminal messages. A quarter of the way through the second level there is a barely audible voice that demands you punch the face of the person closest to you. When this game goes viral, people will be dropping like flies. It’s an Andy Kaufman vibe.

Finally, anything you would like to add or say to your fans?
Luther: Look for a record in the fall of 2010. Too much time between the first and second records. Follow on Twitter @crushluther and add us on Facebook. Thanks for the unbelievable support! See you at a show!  [ END ]