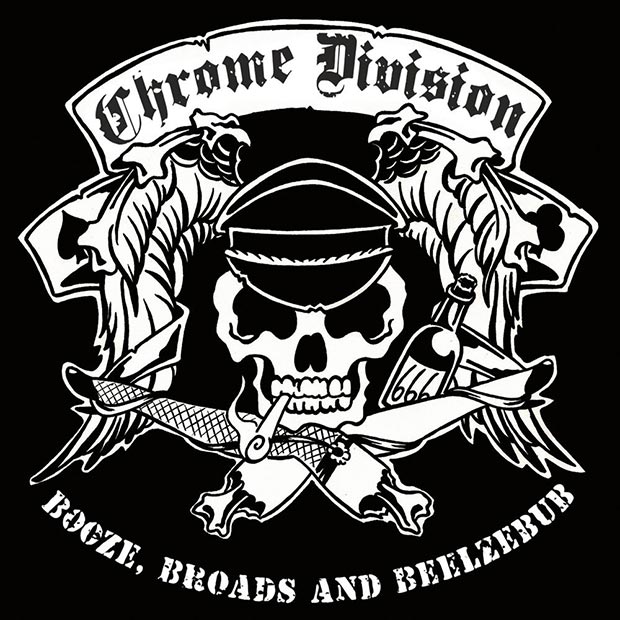 I think I speak for a lot of metalheads when I say that after years of over-exposure to really brutal music, the prospect of bar-inspired rock n’ roll is appealing in theory, but often fails to please in reality. The reason being that rock is often kind of loose, sonically unrefined, and lacks the gut-punch a good metal tune provides. However, when news of a bunch of metal guys doing a rock project reaches my ears, my interest is always peaked. Being from the heavier camp to begin with, metalheads will often be able to let the good times roll but still retain that tight, punchy backbone that drives their favorite genre.

Such is the case with Chrome Division. For those who don’t know, this group is composed of various Norwegian black metal musicians, most prominent among them Shagrath, the vocalist for Dimmu Borgir, who appears here on guitar.

Booze, Broads, And Beelzebub sounds as predicted like a metal-does-rock drinking album. It’s beefy sound and heavy Motorhead and Danzig influences will get you uncapping beers in no time. You can shout along to most of the choruses, and some rowdy thrashing around – don’t put down your drink though – could also be in order.

But the allure kind of ends there…. Some of the songs, such as the title track, are quite good, the ZZ Top cover “Sharp Dressed Man” is rather entertaining as well, but other cuts like “The Devil Walks Proud” are too awkward to keep the vibe going. I realize this band is meant to be tongue-in-cheek, but it kind of wears thin after a few listens.

Still, so many of the riffs are potent, and the guitar tone is so badass…. The album probably warrants being kept around, if only to be pulled out occasionally or mixed into a playlist for a party.  [ END ]