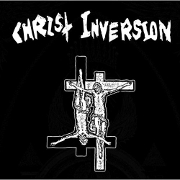 Sometimes jumping at the chance to listen to the side-project of one of your musical heroes can lead to a great discovery, and other times it can disappoint and disillusion you. Sadly, Christ Inversion, the Louisiana black metal band featuring Phil Anselmo (Pantera, Down, Superjoint Ritual) on guitar falls into the latter category.

In meager defense of this release, I will admit that before I listened to it I wasn’t aware that the band had since split up and that this album was simply a compilation of “greatest hits” from their earlier demos.

Still, nothing excuses a legend like Anselmo to put out juvenile, basement-recorded ridiculousness like this. The album is filled with sound bites from The Exorcist, which I assume are meant to be scary but are just dumb and annoying. The lyrics and presentation attempt to be overly evil and “Satanic”, but are the pure clichéd trite that makes most people think black metal is a genre for people with self-esteem issues. I know Anselmo has expressed some Satanic beliefs in the past, so it kind of baffles me that he’d be part of the perpetuation of such a parody when he actually knows what real Satanism is and stands for.

Sonically, Christ Inversion is the kind of black metal album that scares people away from the genre for good. If you read my recent Temple of Baal review, you’ll know what I mean when I say: “it’s so dingy that only a handful of basement gnomes worldwide can dig it”. The worst sounding element is the keyboards, which could easily have been done on a battery-powered Casio with 3 pre-set sounds.

The only redeeming point on this album is the occasional use of slow doomy riffs that ooze Southern sludge and twang. This is not something that you hear much of in black metal, if ever, and if the band had used these elements to create something original instead of copying the worst possible parts of the genre, they could have gone somewhere.  [ END ]

01. Crucifucking the Possessed
02. Prudent to the Thrones of God
03. Obey the Will of Hell
04. Lucifer Rise
05. Enochian Tongues
06. Chimes of Deafening Misery
07. Inflamed with Prayer
08. Godfall