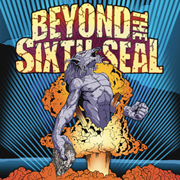 Beyond The Sixth Seal – “The Resurrection Of Everything Tough”

Mike “Gunface” McKenzie and Greg Weeks, are two members of one of my favorite bands of all time – The Red Chord. Having a few records under their belt and having played countless live shows, these two musicians should be taking a vacation and some time to relax from the musical world. Instead of resting, these guys have been involved with another musical project by the name of Beyond The Sixth Seal, formed in the late 90s.

The year is 2007, and Beyond The Sixth Seal have released their Metal Blade Records debut The Resurrection Of Everything Tough; a great melodic death metal album who’s songs will never see the stage. That’s right, the band reformed to become a studio project. At least Mike “Gunface” McKenzie and Greg Weeks are taking a bit of a rest.

When Beyond The Sixth Seal became a studio project, they cut down to a three member band for the recording of The Resurrection Of Everything Tough. McKenzie kept his roll as the vocalist bringing in low death growls to all 13 tracks. Along with being the vocalist, he took on the roll of guitarist. I know some people are wondering if the songs he wrote sound like The Red Chord… they don’t. The guitar riffs are simpler and not as hectic showing a bit more range to Mike’s playing. To join in the writing of strings was his partner in crime, Greg Weeks on the bass. The parts performed on the four-string are simple but provide good back up to the guitar riffs. Last in the band is the only original member of Beyond The Sixth Seal, Brendan Roche who is kicking it on the drums. His uncomplicated playing becomes the back bone to the trio.

Along with the artistic work of these musicians, Paul Romano (Work Hardened) has put together the visual art packaging this album. Having done the layouts for most of The Red Chord’s albums he was brought in to use his creative mind for making the album art. Every image on the album represents something tough such as werewolves, a volcano, a sword and a drawing of the Beyond The Sixth Seal members. Any fans of Paul Romano should get a hold of this album’s art.

The Resurrection Of Everything Tough is a great album that will sadly never be performed. Everyone who is a fan of The Red Chord, Paul Romano’s work, or melodic death metal should definitely check out this release. Maybe if we all bug the band about how great they are, they might indulge us with a live performance someday. Everyone go send a message to Mike/Greg at The Red Chord shows and tell them how much we want to see Beyond The Sixth Seal perform.  [ END ]