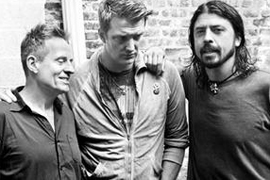 Them Crooked Vultures: “Showing Their Fangs”

There are supergroups and then there are supergroups. Sure we’ve all seen it before, Crosby, Stills, Nash and Young, Velvet Revolver, Audioslave, Temple of the Dog (which I guess would be considered a supergroup in hindsight). These groups and others have gone on to varying degrees of success, some of them have been “super” (relatively speaking) and some of them, well not so “super.” While the supergroup really is nothing new, rarely has there been an edition that is as breathtaking and exciting as Them Crooked Vultures. Who are Them Crooked Vultures you say? Well to offer a simple answer, a new three piece rock and roll band consisting of two of the most talented musicians rock and roll has ever had to offer.

Consisting of John Paul Jones of Led Zeppelin on bass and keyboards, Dave Grohl of the Foo Fighters and Nirvana on drums and Josh Homme from Queens of the Stone Age on guitar and vocals, Them Crooked Vultures are certainly not short on rock royalty. The beginnings of the group go back to the writing and recording of the Foo Fighters’ 2005 double album In Your Honor. Grohl, a huge Led Zeppelin fan, was able to secure the services of Jones to play on a couple of songs for the album’s mellower, acoustic disc. At the time Grohl referred to the meeting and collaboration with Jones as “the second greatest thing to happen to me in my life.” The first hint of a greater collaboration came around the time In Your Honor was released when Grohl stated that the next project he was attempting to instigate was a band with him on drums, Homme on guitar and Jones on bass. Although this set off an initial wave of excitement, the collaboration was kept on hold as Grohl and Homme were busy with commitments to their own respective bands.

Things remained quiet for the next few years until early 2009 when rumours of the project resurfaced. Reports from music magazine NME in July of 2009 had the band recording in Los Angeles. This was followed by the group’s first ever live show in Chicago on August 9th where they performed all new and original material. The recording sessions were so productive that the band finished an entire album’s worth of songs that would be released in the fall. The result of these frantic recording sessions is Them Crooked Vultures self-titled debut record set for release on November 17th.

The album, due to be released on Interscope Records in the U.S. and Sony/BMG internationally, is remarkable for how much of a collaborative effort it is among the three members. All three men contributed roughly equally to the finished product, so much so that they self-produced the record completely on their own. The result is a thirteen track effort that combines the greatest strengths of all three musicians. Homme is one of the best voices in rock today while Jones and Grohl are considered respectively among the best of all time at their instruments. In terms of playing live, the band has a few dates in California and the surrounding area lined up for right when the album drops before some shows in Britain and Germany in December. Plans for the New Year have mostly been kept quiet except for a few shows in Australia in January. Collaborations like Them Crooked Vultures come along once in a lifetime. With so much boredom in rock today it’s nice to be excited again by a band that seems truly worth the hype.  [ END ]