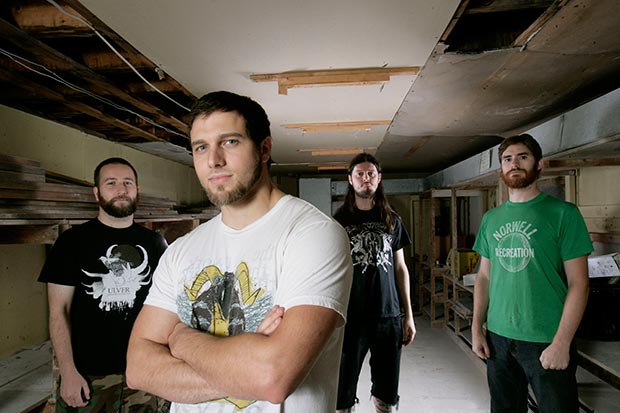 Fed Through The Teeth Machine is the newest release from the Deathcore band The Red Chord. This is the band’s fourth full-length effort and it does not disappoint in the least. Brutal as their music is though, at the core of it all, these guys are unbelievable musicians and the sheer technicality of these tracks is phenomenal. The absolutely insane guitar shredding will leave the listener standing in awe with their mouths agape. I spoke with guitarist Mike “Gunface” McKenzie about the band and their new CD Fed Through The Teeth Machine.

The dizzying level of technicality and sense for adventure in the music is definitely something that sets you apart from the majority of your peers. Any contemporary or classic bands that you guys admire?
Mike: I am a huge fan of Death, The Cardigans, Ulver, Suffocation. There is so much music that is amazing… it’s almost unfair to list any without listing them all, but here are some more: Human Remains, Metallica, Rush, Billy Joel, El Perro del Mar, Ulcerate, Deathspell Omega, Nicole Atkins, Inara George, Rachmaninoff, Penderecki, Brahms, Matt Uelman, Jeremy Soule, Eldar Djangirov, A Camp, Shudder To Think, Unearthly Trance, Shape of Despair, Nortt, Gnaw Their Tongues, Gorguts, Negativa, Kayo Dot, Gregor Samsa, Converge, Mastodon, Hate Eternal, Gregory and the Hawk… etc… etc.

This new album is a perfect deathcore record that harkens back to the genre’s earlier days but still manages many surprises throughout. Did you spend a lot of time on trying to vary the music was it something that just came naturally?
Mike: We always try to keep the music different and interesting. We want music to be challenging and to hold your attention. It is a combination of happening naturally and our efforts.

Playing such visceral music in a recording studio must be vastly different than at one of your chaotic live shows. How did the recording process go for your fourth album?
Mike: It was very laid back and comfortable. We have worked with Jonny Fay both as a recording engineer and bandmate/guitar player, so this wasn’t anything new for us. He already understood about 90% of what we had in mind, being a former member. Being comfortable in the studio helped us getting better performances out of ourselves as well.

Give us some insight into the record Fed Through The Teeth Machine and the meaning behind its title?
Mike: It was taken from a Discovery Channel show called How It’s Made. The term, “fed through the teeth machine” was used, referencing a machine that fastened zippers onto sweatshirts. We thought it had a very dark feel for something so innocent. It spawned a lot of ideas involving manipulation and exploitation.

Give us some insight into the album lyrically. This is a super pissed off sounding record.
Mike: Lyrically, the record is pretty angry. There are some very personal experiences explored in some of the songs as well as some more generalized frustrations. We talk a bit about wasted time, friendships and experiences. There are a few songs about personal struggle and failure and some complete fiction mixed in.

You’ve been in the music business for quite a number of years now. What drives you to keep going year after year while the music business is not in a very good state?
Mike: I love playing and writing music. It’s as simple as that. I can’t see myself doing anything else.

The new material is significantly heavier and more aggressive than anything that I think The Red Chord has done in the past. What brought on this newly envenomed attitude?
Mike: I’m not sure really. Somehow, the music channeled through us just ended up sounding a bit more intense. It might be that I have been working on a lot of soft music for a project called All Rivers. Maybe fulfilling the needs of that end of my musical spectrum is creating a greater need for brutal music.

When you compare the early days of Death metal to the scene today what do you feel has changed for the better? What do you feel has become worse?
Mike: Well the term “Death metal” is pretty different now. And it’s often misused. Death metal does not have one breakdown after another. Although there is groove in it. The death metal of yesteryear is a lot groovier and slower than the death metal of today. These days, there seems to be a constant competition of who is faster or has the more ridiculous frog voice. Older death metal like early Death, Obituary, Disincarnate, Possessed; it seems like they focused on songwriting a bit more than they did on sounding inhuman. I miss the ominous atmosphere a lot of old school stuff had.

What kind of preparation goes into your live show?
Mike: We write out a set list and rehearse it for a few days before tour. Usually I prepare some kind of intro. About 30 minutes before the set time I’ll start warm up guitar and vocal exercises. There’s not a whole lot we do other than that.

Are you playing a good mix of new and old on tour?
Mike: We are playing songs from the three Metal Blade releases on this tour. On headlining shows we throw in a few from Fused. Future tours will be different though. We try to change it up every tour.

How much roadwork do you expect to be doing in support of the disc?
Mike: Probably most of 2010 and maybe a little more!