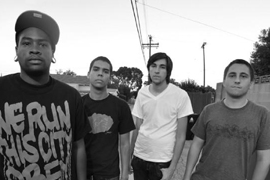 Noriega’s newest release, Desolo, is a lethal mix of slow burning, super gloomy, heavy as hell metal tunes. An abundance of off tempo and at times dissonant sounding guitars await the listener and gradually pound them into submission, forcing them to take notice. Big things are happening with the band and they will be sharing the stage with Eyehategod in December then they will be hitting the road as often as possible in the coming months. Guitarist Andrew Hule spoke with me about the band, their influences and their future plans.

What can fans expect when they pick up a copy of Desolo?
Andrew: Definitely an awkward heavy sound; nothing too pleasant.

Where did the name Noriega originate from and is there a special meaning to it?
Andrew: It’s the name of very large drug trafficker from Panama, that’s about all I know. We went through a lot of name changes, one actually ended up a song title and this one stuck in the end.

Different groups have unique ways of writing their songs. How do you guys go about writing your music? Is it a collective effort or is it more the efforts of one particular member of the band?
Andrew: For the most part, it’s a collective effort, but mainly, Jackson hums out some riff and we work with it. We all like to have our own say on what we think would sound good where and try to work with one another’s ideas. Usually we’ll start with any new riff and jam it a few times to get a feel for it, then sort of break it apart into pieces and make it a little more complex than it previously was then jam it some more.

Every band has its musical influences. What are some of the other bands and artists that have greatly influenced you guys and your music?
Andrew: As a whole we all listen to a multitude of different genres and actually have very separate and distinct tastes that don’t necessarily agree with everyone else’s. However, we all have a good handful of influences that we all share and write our music by. Mainly anything that has an awkward and dissonant sound to it; typically d-tuned and down tempo but not always. Some of my influences and favorite bands are a similar sound to what Noriega sounds like, but others are far from it: Between the Buried and Me, Meshuggah, Protest The Hero, Gaza, Arsis, Cryptopsy, The Dillinger Escape Plan, The Number Twelve Looks Like You, and Ion Dissonance for example. The majority of the music I listen to now is similar to Noriega, but I was heavily influenced by death metal a few years ago and never listened to anything similar to Noriega. The other members listen to all kinds of bands that sound actually nothing like Noriega. I know Jackson really likes Thursday, New Found Glory and a bunch of post rock and Emo shit; Trae is all about butt rock, hip-hop and bringing the tank; and Brandon loves SunnO.

Give us some insight into the record Desolo and the meaning behind its title?
Andrew: ‘Desolo’ is Latin for abandoned, and in a way that was kind of the sound and feel we were going for on this CD. There are a lot of drone parts that carry on for a good amount of time; i.e. the end of “Ballacaust,” that sort of portrays abandonment and a sense of being lost. To me, the ending of “Detriment” specifically resembles abandonment the most because of how the lead guitar sounds like an endless plummet into nothingness while the rhythm carries on.

How has MySpace and the internet impacted your band and do you think downloading helps or hinders the artists?
Andrew: MySpace has definitely helped us get our name out there, we didn’t create a MySpace account for a long time actually. We had written, recorded and basically mastered all of Desolo before we appeared on MySpace, that way we could be discovered as a legitimate band and not one of the fifty names we came up with before Noriega, you know? We wanted to be taken seriously.

When playing together and ultimately recording this CD did you find that you could express yourself creatively enough?
Andrew: Yes and no. While writing, recording and perfecting this CD, I was content with our creativity and enjoyed jamming everything we had. I wasn’t used to playing all these awkward time signatures so it was definitely a step up in my playing, and that eventually became a larger influence for me.

Do you decide on a suitable sound fairly quickly, or do you tend to tweak tones obsessively?
Andrew: Like I said, our sound has been somewhat similar from the start, but grew into something new that we all like and can agree on. For a small time, me and Jackson were actually jamming softer, more post rock stuff just to see what we could come up with and that might carry over into our newer ideas for our next CD. Our sound will constantly be changing I’m sure, but we’ll always keep a heavy tone.

What does the future hold for you guys as a band?
Andrew: We hope to be playing a lot more shows soon, we have a few to come in December including our CD release party on December 5th. In addition, touring is a must, and we would like to do a west coast tour this winter. Since me and Jackson are both students, we need to tour every chance we can get, so winter break, hopefully.

Any closing words?
Andrew: I just found out we’ll be playing with Eyehategod December 12th!  [ END ]