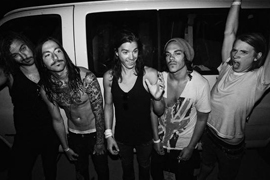 My My Misfire – “The Sinatra” (ft. Mitch Lucker of Suicide Silence)

the Skinny: Let’s go out in style! That is the attitude My My Misfire lives, breathes, and plays by. Hailing from the twin cities of Minneapolis and St. Paul, Minnesota, the band formed in late 2007 and fueled by two passions. “This Band was formed from our love to party and rock and roll. My My Misfire’s ambitious attitude in promoting and booking shows themselves has resulted in playing regional and national shows across the country. Along the way the band has had the opportunity to share the stage with bands including Lacuna Coil, All That Remains, Drop Dead Gorgeous, and others. The band has also had the pleasure of working with Beau Burchell of Saosin on an EP dubbed Sesso that contains six songs of pure, raw, energetic rock anthems which resulted in them being the only unsigned band featured on the Saw VI Soundtrack. Their song “The Sinatra”, which features Mitch Lucker of Suicide Silence, is one of the strongest tracks on the album. This is the call to the world, My My Misfire owns the party!  [ END ]