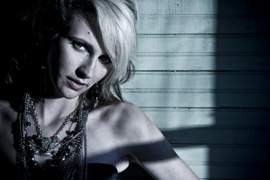 Pure unadulterated Rock and Roll is what Katie Kerkhover is all about. Her newest release Blister is jam-packed with monster guitars riffs and killer vocals that form a series of polished rock tunes sure to satisfy even the most discriminate music fan. I had a chance to speak with Katie about the CD and her music in general.

The album is graced with an incredible organic and warm sounding production that is very easy to listen to while still retaining a good amount of grittiness. Are you satisfied with the outcome?
Katie: Absolutely! I love everything about Blister. It took about a year to make and during that time my band mate/producer and I really took the time to think about every tone setting and compressor level that was going on the record. It was hard for me to signoff on something because I knew it was going to be that way forever! After everything was finished and I took a couple of weeks off from listening to every little detail, I was like. Wow, this sounds great! I love everything about the record and I love that I can pop it in my stereo and enjoy it!

Any sneak peek you can give us into the kind of themes that are found on your new CD?
Katie: The theme of the record is an aggressive girl who knows what she wants and isn’t afraid to piss people off and do what ever it takes to get it. Sex, drugs and rock and roll. There are several references to all of them in the songs. I wanted to sing about feelings and ideas that most girls have but may be to shy to act on. Guys have been doing it for years, so let’s turn the tables.

What song from that album is the most exciting for you to sing live?
Katie: It’s hard to pick just one. I would say that it would have to be a toss up between “Can’t Handle Me” and “Habit.” They are both rockin’ songs. “Habit” has a great backbeat that everyone on stage really gets into. “Can’t Handle Me” is fun because it’s a straight ahead rock song with a bunch of gang vocals that everyone can sing along with.

Who are some of the other bands and artists that have greatly influenced you and your music?
Katie: I am a fan of music in general so I am influenced by all kinds of music. Everything from rock bands like Nickelback, Motley Crue and Hinder to more of a punk feel from Green Day, Sum 41 and the kick ass girl attitude of Pink and Juliette Lewis. I am even into Hollywood Undead. Even though I don’t rap, I feel that pieces of all these bands come through in my music.

What is your musical background?
Katie: I began taking classical violin lessons at the age of 4 and got a guitar for Christmas when I was 10 years old. I grew up on a farm in Southern Illinois, so there was not really anything else to do but play music in my room. When I turned 17, I was ready to get out on my own, like every teenager, and I moved to Nashville, Tennessee. I chose Nashville because it was the closest city with a music scene that I could drive to. Since Nashville is the Country Music Capitol, and I played the violin, I toured with several major country-recording artists until I could break out on my own. I am grateful for that experience, because it allowed me to play on big stages and in front of even bigger audiences. Now it’s my turn to do it with my music and I couldn’t be more excited.

All of that passion that you play with must be tough on you physically. How do you prepare for the physical demands of a tour?
Katie: We have a lot of rehearsals leading up to it. You can try to prepare as much as possible, but there is still nothing like getting out on the stage for that first show. The combination of your adrenaline mixes with the excitement of the audience and the set flies by. Once you get the first couple of shows out of the way you kind of settle into your rhythm and it becomes easier. Then the key is making sure you get enough rest.

What is the one thing you travel with that you just cannot live without?
Katie: My iPhone. I love it! I have everything I could ever need on it. It leads me to food, water and even bathrooms. It is like my survival kit. Now, if it could only dress me and do my hair.

Do you find it difficult being away from family and friends for such an extensive period of time? How do you cope with the separation?
Katie: It is difficult to be away from your family for long periods of time, but I’ve been touring since I was 17, so I’ve adjusted to it over the years. I am very close with my family and am always asking their opinions on things so I keep in touch with them mostly through Skype. It is nice because we get to see each other instead of just talking over the phone. Although it does allow my mom to make sure I am still eating well because she can see me.

Do you have any special rules or rituals that you follow while you are out on the road?
Katie: Not really. I try to stay healthy by eating right and exercising. You know that chocolate cake in catering is always calling my name! But, for the most part, I am still the normal me.

When you are on the road for a while, I am sure you see and experience many different things you might not even have known existed. Are there any stories that stand out in your mind as being exceptionally strange or odd?
Katie: Traveling from city to city on a daily basis doesn’t always allow for much time spent in each place, so as a result, most of the stories are centered around the my band and the venues we play, and we’ve played some dives. I remember this one club, I will not mention the name but I had to ask for a broom from the club owner to sweep the broken beer bottles off of the stage from the night before. You always hear about the stage with the chicken wire around it to keep the band safe. This was one of those stages, and the bathrooms, well let’s just say we all held our water until we got back to the hotel. We are so often amazed at what we walk into on any given night. However, as bad as it may seem, I would not change it for world. It is all about paying the dues. I love every minute of it.  [ END ]